It was our best football of the year says Murray 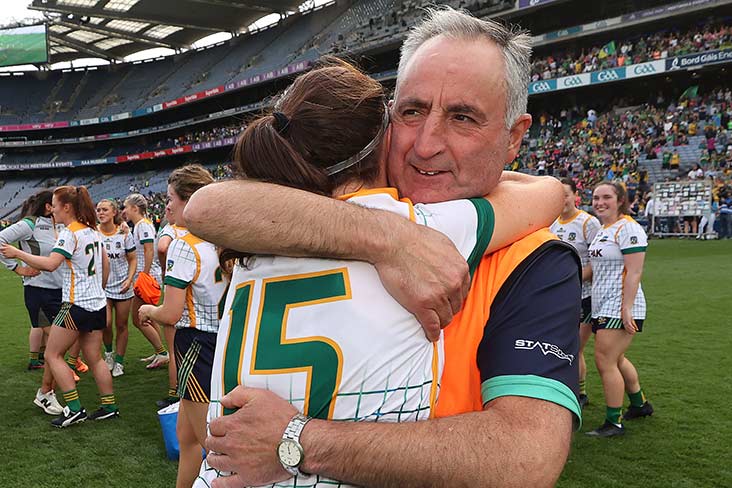 Meath manager Eamonn Murray says his side had unleashed their best football of 2022 to qualify for a second successive TG4 All-Ireland Senior Final after a narrow win over Donegal.

It was another thrilling semi-final and Emma Duggan blitzed Donegal in the closing stages to send the reigning champions back to Croke Park on 31 July.

Meath had already beaten Donegal in the Lidl NFL Division 1 final earlier this year and it looked to be going down to the wire until Meath dug it out again, just like they did in the quarter-final against Galway.

“There's no point in winning the league by 20 points and losing today. We’ve timed our run to perfection,” said Murray.

“That’s two weeks in a row. And this time last year we were six points down against Cork and we came back. Today was another nail-biter.

“When we lost Máire O’Shaughnessy we put six points up on the board. It's unbelievable. That's our best football that we played all year.”

Donegal had never reached a senior decider but they started with confidence on Saturday, on the back of their stunning victory over last year’s beaten finalists Dublin.

Niamh McLaughlin scored a goal from a penalty and her side took a 1-3 to 0-3 lead into half-time. Meath looked to be in trouble but they had done this all before.

The holders began the second half like champions with six points in a row as Vikki Wall, Niamh O’Sullivan, Duggan and Stacey Grimes (three) all found their range.

It was phenomenal pressure from the beaten Leinster finalists but Donegal came roaring back with a couple of points from Yvonne Bonner and a Katy Herron effort.

Nevertheless, Meath held on with Duggan instrumental in the closing stages and Donegal manager Maxi Curran knew it was a chance missed.

“It’s probably the end of an era, alright. Nobody will probably be making a decision in the next day or two but it’s probably getting close to it,” said Curran.

“We had a period of dominance in the first half, where we had the lion’s share of possession. We kicked some wides and some short, and maybe ran into some blocks.

“Compare that to the Meath at the start of the second half, where they scored six points. That was crucial for them and that’s probably the biggest difference in the two teams.

“They got their scores when they were on top and we didn’t. We had our periods, no doubt about it. Then when they got their noses in front, they’re always going to be hard to reel in at that point.”