Ladies previews: Road to Croker begins with semi-finals in Munster and Ulster 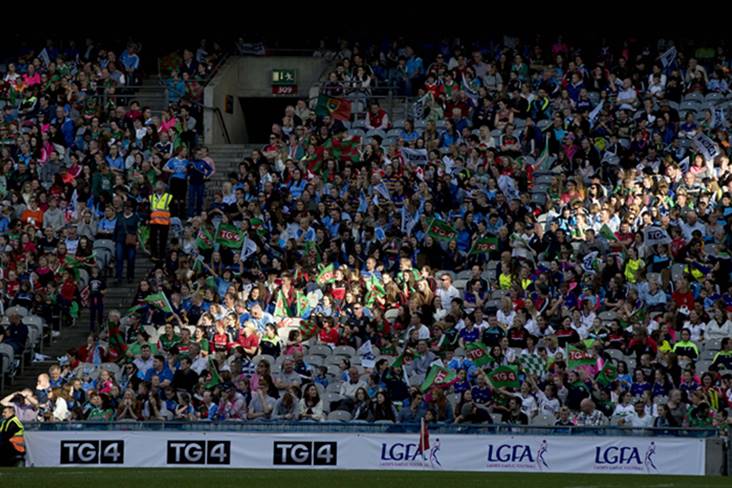 THE road to Croke Park in the 2018 TG4 All-Ireland senior championship begins this weekend - with key fixtures down for decision in Munster and Ulster.

In Munster, it's semi-final weekend as Tipperary play host to Cork on Saturday in Ardfinnan (2pm), before Kerry host Waterford at Fitzgerald Stadium in Killarney on Sunday (1.30pm).

On Sunday evening, attention switches to Inniskeen in county Monaghan as Armagh tackle Cavan for a place in the Ulster final (6pm).

Also in Ulster, there's a junior final between Derry and Antrim down for decision on Saturday (7pm), along with an intermediate semi-final clash between Down and Tyrone.

In Leinster on Sunday, Louth play Kilkenny in the junior championship and there are three intermediate quarter-finals on the agenda, as Wicklow host Meath, Wexford entertain Kildare and Offaly host Laois.

Tipperary are flying high after securing promotion to Division 1 of the Lidl National League, thanks to their recent Division 2 final victory over Cavan at Parnell Park.

They're also the reigning TG4 Munster and All-Ireland intermediate champions but face a real baptism of fire on their return to senior championship football.

Cork are the visitors to Ardfinnan on Saturday for what promises to be a cracking tie.

All eyes will be on the Rebelettes as they aim to bounce back from their Lidl NFL Division 1 defeat to Mayo, and lay down a marker for the summer ahead.

It's still expected that Cork will be in the shake-up for All-Ireland senior honours come the end of the season but of more immediate concern to Ephie Fitzgerald's charges is regaining the provincial title, as Kerry are the current holders.

An intriguing tie lies in store and adding to the spice is the fact that current Tipp boss Shane Ronayne will have the inside track on many of the Cork players, as he's the current Mourneabbey club manager.

Tipp have potential match-winners in Aishling Moloney, Aisling McCarthy, Gillian O'Brien and dual star Orla O'Dwyer but Cork's team is laced with class, and they'll look to the O'Sullivans, Ciara and Doireann, and inside pair Orla Finn and Eimear Scally for attacking inspiration.

Kerry's ladies, the reigning TG4 Munster senior champions, get the chance to parade their skills in a double-header along the county's men's team.

Under the guidance of new manager Eddie Sheehy, Kerry will look to put a turbulent League campaign behind them and produce an encouraging championship campaign.

The Kingdom won't need reminding, however, that Waterford beat them in the round-robin stage of the 2017 Munster championship, and they needed a late flourish to see off the Déise in the provincial decider.

Waterford have made excellent progress under manager Pat Sullivan in recent seasons and they can't be underestimated.

They're the only team to beat Tipperary in a competitive game in 2018 and they fell narrowly short against Cavan in the Lidl NFL Division 2 semi-final.

Kerry will see this game as the start of a new era under Sheehy, and with former Kerry and Munster GAA chairman Sean Walsh now at the helm as Kerry LGFA chairperson.

Stability off the field could result in a positive performance on it and Kerry have plenty of experience in their ranks, including Aislinn Desmond, All-Star Lorraine Scanlon and attackers Louise Ní Mhuircheartaigh and skipper Sarah Houlihan.

Waterford had Michelle McGrath named on the Lidl NFL Division 2 team of the year recently, while Aileen Wall and Maria Delahunty are marquee forwards.

When these counties met in round 2 of the Lidl NFL Division 2 League campaign earlier in the year, they fought out a thrilling 2-14 apiece draw.

They went on to make the knock-out stages of the League, Armagh losing to Tipperary in the final before Cavan came a cropper against the Premier County in the decider.

There's little to separate Cavan and Armagh and this fixture will come down to fine margins.

The fact that current Cavan boss James Daly was a hugely-successful Armagh manager will provide him with an inside track on the Breffni County's opponents but that may not count for much once the ball is thrown in.

Cavan were finalists two years ago while Armagh last lifted the Ulster title back in 2014, when Daly was in charge.

Armagh also played in a couple of All-Ireland semi-finals during his tenure and so this is a man who's used to big occasions.

Armagh have marquee forward Aimee Mackin to call upon as they target another Ulster final appearance, with Northern Ireland netball star Caroline O'Hanlon pulling the strings in midfield.

Cavan will look to Aisling Maguire and Aishling Sheridan to fire the bullets up front as they go in search of victory.

Down will be massive underdogs against Tyrone in the TG4 Ulster intermediate championship semi-final.

They did reach the Lidl Division 3 semi-finals but were comprehensively beaten by Meath.

Tyrone, meanwhile, were beaten All-Ireland finalists last year and finished just outside the top four in the race for Lidl NFL Division 2 slots.

With Gerry Moane still at the helm, they'll want to get back to Croke Park in September and go one step better.

There's silverware to be handed out in Emyvale on Saturday evening as Antrim and Derry lock horns for the TG4 Ulster junior crown.

Antrim were well beaten by champions Wicklow in the Lidl NFL Division 4 semi-final, while Derry failed to make the last four.

But Derry were beaten TG4 All-Ireland junior finalists last year, losing out to Fermanagh after a replay in Clones.

Derry beat Antrim in last year's provincial semi-final after extra-time and this one might go all the way again.

The Wee County were beaten Lidl NFL Division 4 finalists against Wicklow recently but will fancy their chances of claiming a provincial title in the three-county competition, with Carlow also in the mix.

Carlow kicked off their campaign with victory over Kilkenny last Sunday and Louth are expected to follow suit with a win on Sunday, as the Cats look to re-establish themselves as a force to be reckoned with in time.

Lidl NFL Division 4 champions Wicklow tackle Division 3 runners-up Meath in what should be an interesting tie.

There are TG4 Leinster semi-final spots up for grabs this weekend, with Longford granted a bye to the last four, and Wicklow will look to make home advantage count.

But Meath are reigning provincial champions in the intermediate grade, having stunned Wexford in last year's decider.

Wexford are many people's fancy not only to win the TG4 Leinster title this year, but to also challenge for All-Ireland glory.

The Model County won the Lidl NFL Division 3 title recently and they provided Tipp, who've made excellent progress, with some serious tests in recent years.

Anthony Masterson, the county's former men's team goalkeeper, is an astute manager and has done a fine job with Wexford.

But Kildare showed real signs of improvement this year and the Lilywhites reached the Division 3 semi-finals, where they lost out to Sunday's opponents by nine points.

Laois avoided relegation from Division 2 of the Lidl National League and will hope that's a stepping stone to further improvement.

The O'Moore County can boast a rich Ladies Football tradition and an encouraging championship campaign this summer would hint at further revival.

But they'll get nothing easy from Offaly on their visit to Tubber. The Faithful County, in the group stages of Division 3, were competitive in their fixtures against eventual finalists Wexford and Meath.

Stay up-to-date with this weekend's football and hurling championship action on our Match Tracker where we will be bringing live updates and scores from around the grounds.