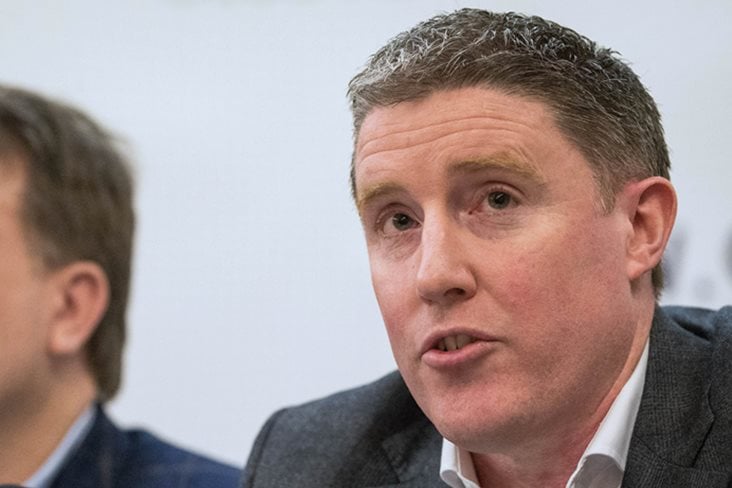 Michael Briody of the CPA

CPA Chairman Micheál Briody has called on all Central Council delegates to support a motion from Roscommon GAA that an immediate review is conducted of the GAA national games programme.

The motion is on the Agenda for the meeting of the GAA’s main decision-making group this weekend, and according to players’ association Chairman, it has to be given due consideration and support.

Also on the agenda are two proposals for the introduction of Tier 2 football competitions. The CPA are calling on delegates to support the Roscommon motion and say no to Tier 2 until the so-called weaker counties are provided for as part of a blank canvas solution.

“We are relying on and expect County delegates to address this issue head on. A considerable number have already expressed serious concern,” CPA chairman Micheál Briody said.

“At the recent Fixtures Discussion Group on 29th August, hosted by An Uachtarán John Horan, we asked for the appointment of a select committee consisting of experienced suitably qualified people from both inside and outside the GAA with a strong independent chair to look at the Fixtures Crisis in totality. Nobody in the room argued that it wasn’t needed and indeed it was verbally supported by many esteemed people in the room as being the logical and strategic thing to do.”

“We have since heard prominent GAA people echo this call in the media.

“It is no surprise that Roscommon GAA have stepped forward to say enough is enough, someone had to say stop sooner or later. It is a fairly serious matter when a county committee feels they need to step in and plead for common sense to prevail.

“For almost two years now the CPA has called for an immediate “Blank Canvass” approach to fixing the fixtures. Some progress has been made but the lack of real urgency is not acceptable in our view. Behind the recent ESRI and CPA findings and submissions are the lives of young sports people. Years and sports careers pass very quickly as this report actually highlights. This in our view places an enormous requirement and responsibility for leadership and decisive action.

“We are witnessing a number of alarming developments in the GAA. We were told that no change to the playing calendar could be considered for three years yet here we are with two proposals on the table for Tier 2 competitions in football. There is inherent value in a multi tiered football structure but it beggars belief that this is being brought to the table as yet another incremental change that could sound the death knell for summer club football which is already practically extinct.

“This comes on the back of the GAA-sanctioned breaches of its own rules by allowing tournament matches involving Tier 1 hurling counties in Australia and the United States. In some respects yes, that is a matter for individual counties, but it sends out a message that the hierarchy is able to cherry pick its own rulebook. One of the recent findings among players was that they needed a break.”