McKenna Cup: Donegal and Down ease into last four 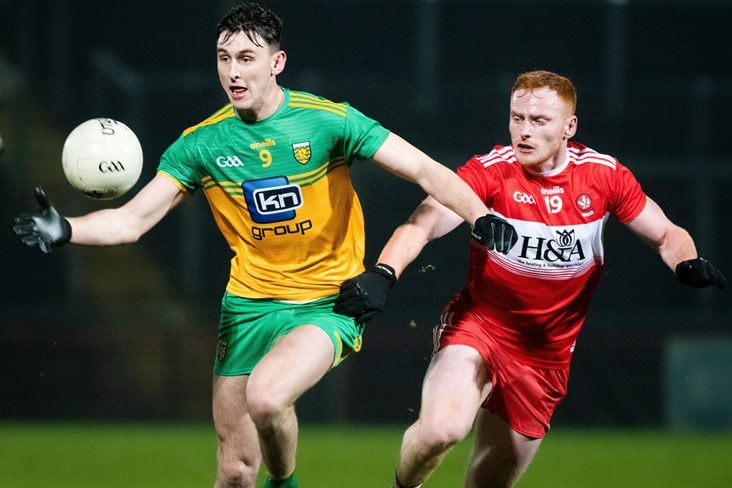 Donegal will face Monaghan in the semi-finals of the Dr McKenna Cup after seeing off Derry by 1-10 to 0-8 at Celtic Park tonight.

Caolan Ward’s 55th minute goal sealed the deal for the Ulster champions against the hosts as they picked up their second win in as many outings in this competition.

It was Ward’s point that saw them leading by 0-4 to 0-2 at the end of a drab first-half and while Ryan Bell would make it a one-point game early in the restart, the Oak Leafers wouldn’t get any closer as their opponents took off from there.

Michael Langan, Daire O’Baoil and Ethan O'Donnell began to get the visitors motoring and Andrew McClean and Langan would have it at 0-9 to 0-4 prior to Ward hitting the net with a classy finish to all but ensure Donegal’s victory.

Bell pulled back what proved consolation scores at the other end, as the Tir Chonaill men pulled up winning and now look forward to a date with Monaghan this Sunday afternoon.

Meanwhile, Down are set to play Tyrone at the Athletic Grounds on the same day after cruising past Antrim on 2-17 to 0-15 score-line in Newry tonight.

Barry O’Hagan and Corey Quinn grabbed both goals in the first-half for the home side as they led by 2-8 to 0-7 and they’d kick on early in the restart with points from Pat Havern, O’Hagan and captain Darren O’Hagan.

Paddy McBride and Adam Loughran helped raise the Saffrons’ tally in the final quarter but it was too little, too late as Paddy Tally’s team were already safely through to the last four against holders Tyrone.

Two late Darren McCurry points helped the Red Hands to a thrilling 3-18 to 3-15 victory over Armagh at the Athletic Grounds to seal their semi-final berth this weekend.