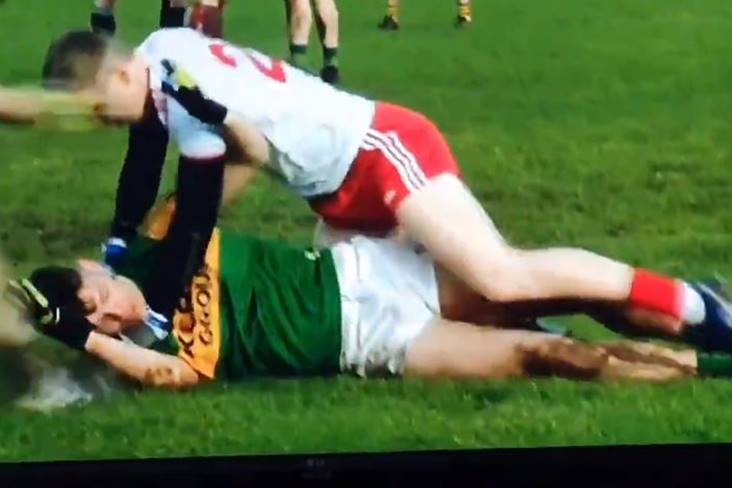 Kerry's David Clifford is pinned to the ground by Tyrone's Ben McDonnell.

Two points up but a man down, what do you do?? Single out an opposition player on a yellow, drag him to the ground and even things up. Scandalous that officials dont cop onto this 🙈 #gaabeo pic.twitter.com/uOE8I3Yarg

Can’t blame any referee for this, can only go on what his officials tell him. They’ll be no dinner for them two umpires on the way home tonight. https://t.co/xLHg25XZrs

Maybe the Monday Morning meeting should be about showing this to referees & linesmen , total cop out !!! https://t.co/jOPmRQs97Z

Send a sub on to the star forward on a yellow, start a row pull him down to the ground. Smart by Tyrone but not so smart by the 2 umpires 10 yards away with no clue of who is on a yellow or the situation that’s just unfolded. Proper camera angles may suggest otherwise. #gaa

Scandalous behaviour by Tyrone management to get David Clifford sent off. Bringing on a sub to wrestle him to the ground. Good luck to that shite

Can't believe the umpire called a yellow for Clifford.. oldest trick in the book..ridiculous officiating. Clearly trying to just protect himself.

Joke decision. Umpires should be ashamed of themselves.

Never an easy place to go, loads to take from the game. A badly needed short break to rest up & go again. Well done boys @Kerry_Official 💚💛

Spoke to Declan Bonner during the week, Donegal trained in O Donnell Park on Thursday night, but before that the last time they were in O Donnell park was against Fermanagh last year. It’s like having an away game he said. My view is we kick both last minute frees in Ballybofey.

Both Murphy and Thompson far more used to kicking frees in training in Ballybofey. I just think with the league so tight and so important we should use every bit of advantage we can. And playing on Ballybofey is a huge advantage for Donegal.

& that is why mgrs & players go nuts. Quite rightly time added on 2the extra time in Dublin game as stoppages took place in additional time. 2day in navan at least 90 secs of delays during the 4 mins extra time and the ref blows it up pretty much on 4. #AllianzLeagues frustrating

Not a cut at referees but it’s obvious as hell the amount of extra time in matches is an issue. 6 min called in second half last night and more than 9 played. It’s an issue every match. Should we follow ladies game,who have the sin bin and use the clock which takes it from refs??

You have to tip your hat to that come back! Well played in second half @DubGAAOfficial @S_Bugsyy is starting to show his class, big year ahead for him! #DUBvMON

Incredible score by Rory Beggan for @monaghangaa from a placed ball 65 metres from the target! pic.twitter.com/VG3uYms3vs

The effect of bringing high profile teams and players to passionate hurling areas, well done to all involved 👏 lets see more of it https://t.co/BhOVWueGnP

This just clarifies what an Outrageous Decision was made during the week to Not allow two of our main players tog out for the u20 Championship yesterday! https://t.co/LijY8OAg3t pic.twitter.com/dKffcdPfpF

Wexford Chairman Derek Kent congratulating Brian Malone Tonight on his win over Waterford and his 164 th appearance in the purple and gold jersey @shelmaliers pic.twitter.com/tzP5t8W9aO

How goods footy in the rain. Round one done and dusted. Great to be back #gwsgiants 🧡 pic.twitter.com/gsgouuoDbh

Penalties to decide it? Disgraceful https://t.co/20Pw0T6KNc