'I can't see why we can't push on in both codes' 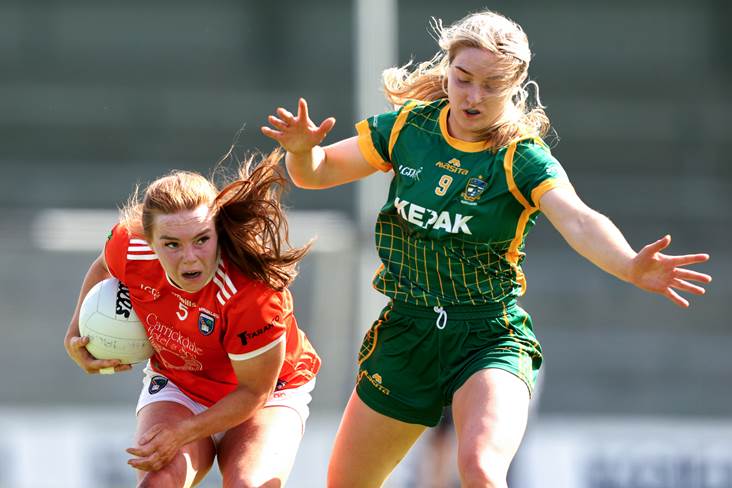 A powerful and dynamic midfielder for Armagh, if anyone in the Orchard team was a likely rugby recruit, she fitted the bill nicely.

Today, Niamh Marley looks set to line out for Ulster in their interprovincial clash with Leinster before she turns her attentions to Armagh’s Lidl NFL Division 2 opener against Cavan tomorrow.

And although she is a try-scoring machine in the backline for Dungannon and her province, it wasn’t the smoothest transition into life with the egg-shaped ball. It’s not easy dedicating yourself to Ladies football and rugby without one of your cruciate ligaments.

“Back around 2017, I tore my cruciate and I had been to six different physios and they had said ‘no your cruciate is fine, everything is fine’.

“The MRI came back and everything looked fine,” said Marley.

“But I was lucky I had a really good consultant and he filled me in. I had been playing on without a cruciate for about six months. It just so happened that the rest of my quads and hamstrings had been so strong that for 40 or 50 minutes of a game I would last but then the knee would give way.

“I think that put rugby on the backburner.”

It was no surprise when Marley decided to go down the Ladies football route, coming from a family steeped in the game.

Her father, Noel, helped Armagh to an unlikely All-Ireland final appearance in 1977 and his four daughters have since proudly represented their club and gone on to receive county honours too.

The eldest, Caoimhe, was a stalwart and former captain for Armagh before she went into the coaching and management side of things. Between her and other sisters Sarah and Catherine, there was no shortage of inspiration in the household.

“With daddy playing with the 1977 team, he was a big massive influence for me, as well as Caoimhe,” said Marley.

“There is about ten years between me and her and I didn’t really have any notion. I know men’s football was a big deal but Caoimhe really set the standard of where you wanted to be.

“It’s funny because Caoimhe is a PE teacher and I kind of just wanted to be just like her. “Everything she did, I am so grateful and thankful that I have that kind of role model that was tangible and so close to me.

“I know everybody has role models, the likes of Paul McGrane and Kieran McGeeney that they have seen but haven’t been able to meet every single day.”

And although Caoimhe is now involved with Fermanagh in a coaching capacity, there are still three Marley sisters from the Lissummon club flying the flag with Armagh.

“At the moment my sister, Catherine, she is the baby, and Sarah, she is also part of the panel but she is out with a cruciate injury, unfortunately,” said Marley.

For Niamh, it’s a 15th season playing with her beloved county, having joined the ranks just before her 16th birthday.

She was still playing for the Armagh U16s at the time, when Caoimhe proposed that she make the step up and come to training with Jim Finnegan’s side.

It was a dream at such a young age but nevertheless Marley had to learn fast, and she did, becoming a mainstay for years to come. Now she can look forward to 2023 with renewed optimism.

“I still think that we are an All-Ireland winning team time and time again,” said Marley.

“I know the Ulster final was a major high last year because we almost left that behind us. With us winning that, it really did push us on and those little games and little fine margins, coming up against those bigger southern teams.

“I do think we have the quality of players and at the moment, this year definitely, we have the management. I just don’t think it clicked last year and for me as a player it was frustrating and disappointing.

“You give your life and soul. It’s an elite sport for all intents and purposes. You want that All-Ireland medal and it’s what I have been striving for for 15 seasons.”

Cavan are the opponents tomorrow when Division 2 of the Lidl NFL throws-in at Drumlane. It’s a fixture that retains plenty of charm and bragging rights for one Ulster county ahead of the TG4 Championship later in the summer.

“I love playing down in Cavan. I know Cavan will want to start their campaign well. I know they have a few ups and downs from previous years but I think we will be going into this with no fear,” said Marley.

“I think the great thing is we have a great panel of players, a lot of youth mixed with older ones. It will be great to give them an idea of what the League campaign is like and how different it is coming from the club scene.”

Shane McCormack has taken over from Ronan Murphy in the managerial hot-seat and Marley is excited by what she has seen so far.

The signs are positive across the board and she is thrilled to have the former Kildare goalkeeper on her side on weekends like this.

“Shane is a brilliant man manager and I know with having managed school teams and helping to manage the boys U-16 team, it’s kind of like you need to get to know your players,” said Marley.

“Shane will drop in a text or he will phone just to make sure that everything is going okay. In terms of rugby, making sure that my load is being managed. Shane is very open and open to change and what you have to say, and flexible, which I really appreciate.”

Ulster were beaten by Connacht in last weekend’s interprovincial derby but Marley certainly didn’t let the game pass her by and she scored a try in her first appearance at Kingspan Stadium in Belfast.

Rugby was never part of the equation until a chance meeting with former Ireland international, Fiona Coghlan, in 2017. A promotional photoshoot for the 2017 Women's Rugby World Cup led to a conversation between the two.

It sparked a new interest and Marley attended the Ulster Rugby Talent ID day in Portadown. She made an instant impact before her cruciate injuries set her back.

But in September of 2021, she joined up with Dungannon and scored four tries before half-time in a pre-season friendly, four years after she first dabbled in the sport.

Marley would score 13 tries in her first eight competitive matches as a strike-running outside centre. She got called into the Ulster squad and played the full game in a friendly against Connacht in Enniskillen last May, and she never looked back.

“It’s great, I think with the way the two codes are, it’s such an exciting place,” said Marley.

“Ulster have been in the background for quite some time with not having won many or any inter-pro games but now the games could be there for the taking.

“Then, with the likes of Armagh, the new management and the good group of players and then adding to that, I can’t see why we can’t push on in both codes.”