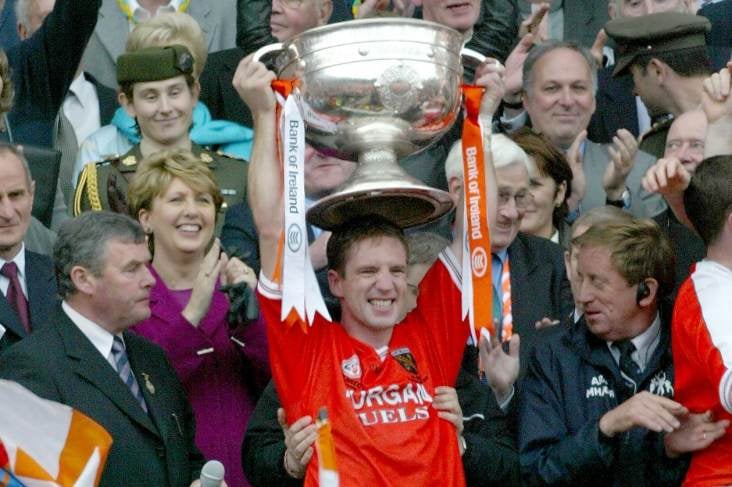 It's 20 years to the day since Armagh won their first All-Ireland senior football championship title.

Joe Kernan’s men pulled off the remarkable feat by beating Kerry on a 1-12 to 0-14 score-line at Croke Park to bring the Sam Maguire Cup back to the Orchard County for the first time.

It hadn’t looked good at half-time for the Ulster champions, as they trailed the Kingdom by 0-11 to 0-7 at the halfway stage after ace attacker Oisin McConville had missed a penalty.

Armagh received a spirited half-time team talk from Kernan that saw them late out on to the pitch for the second-half and a superbly taken goal from ‘Man of the Match’ McConville in the 55th minute reduced their opponents’ lead to the minimum.

Ronan Clarke and Steven McDonnell supplied the points afterwards that gave the Orchard men their first lead since the opening stages and they’d hold out for a historic victory which saw team captain Kieran McGeeney proudly raising the Sam Maguire Cup in front of a sea of orange at headquarters.

Celebrating 20 years on…today🧡🏆
What a night for our 2002 All Ireland winning team reunion…looking back on the memories of that amazing day in September.

For the Day thats in it, 20 years, where has the time gone. #ArmaghForSam #ArmaghGAA #History pic.twitter.com/xNisL1mbYR

About this time 20yrs ago I woke up in a City West Hotel room. Under the door was a letter from a sporting hero & global icon. To say I was inspired is an understatement. I went down for my All Ireland Final breakfast bouncing and brimming with confidence & determination 🏆#GAA pic.twitter.com/nmZm6j792S