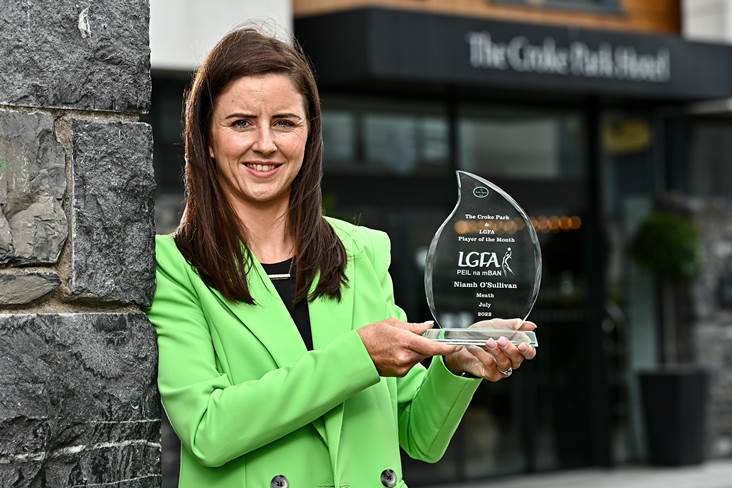 Meath star Niamh O’Sullivan has been honoured with The Croke Park/LGFA Player of the Month award for July 2022.

The 32-year-old Dunshaughlin Royal Gaels player produced a blistering performance in the TG4 All-Ireland Senior Final victory over Kerry on July 31, posting 1-2 in a Player of the Match display.

That outing for the vastly-experienced forward capped another remarkable season of consistency for O’Sullivan, who was also a TG4 All-Ireland Senior Championship winner in 2021, before she collected a first TG4 All Star award.

O’Sullivan, a former county team captain, has been a mainstay in the Meath Senior colours since making her inter-county debut in 2008.

The primary schoolteacher won a TG4 All-Ireland Intermediate medal in 2020, and has since gone on to land back-to-back Senior titles.

O’Sullivan was also a key member of the teams that won successive Lidl National League titles – as Meath followed up their Division 2 success in 2021 with top-flight glory this year.

One of the most selfless performers on the Meath team, O’Sullivan is also more than capable of taking vital scores herself.

Niamh’s goal midway through the second half of the recent Final victory over Kerry was a pivotal score, and Meath pushed for home thereafter.

Niamh also scored a crucial point in the semi-final victory over Donegal, as the Royals advanced to the Final.