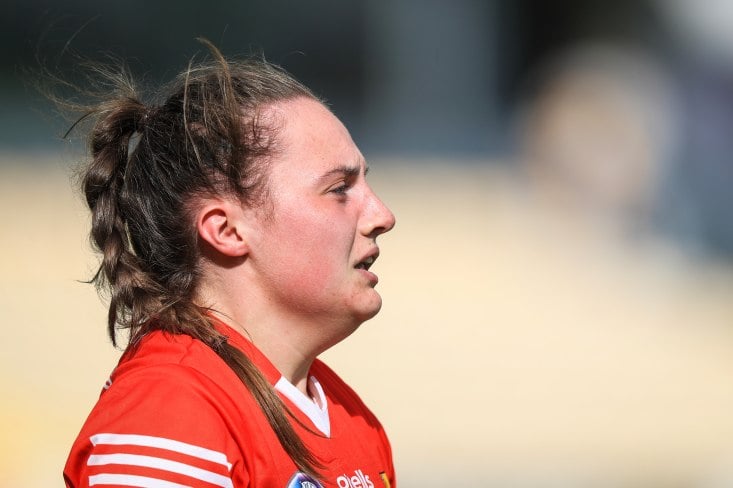 The manner in which she namechecks the many people who have helped her along her path is probably informative, not just when it comes to Rachel Harty’s success as a camogie player, but in her influence on others as a soccer coach.

Standing outside the clubhouse at the Cork Camogie grounds in Blackrock, Harty makes no reference to her ‘other life’ and how she has helped shape the career of others. It is clearly compartmentalised.

With Rebel skipper Finola Neville sidelined by a second cruciate knee ligament injury, nine years after her first, Harty will lead the Rebels onto the pitch in Sunday’s Glen Dimplex All-Ireland intermediate final against Galway at Croke Park (2pm, live on RTÉ2).

It makes sense that Coleman would have given the 24-year-old Ballyhea clubwoman a leadership role, even though he knew nothing of her soccer experience until this week, for it is something he clearly saw came naturally to her, in a real active way rather than shouting the odds for the sake of it.

A teacher at Cork Educate Together Secondary School, Harty, who played soccer in the Women’s National League player with Cork City, is now a B licence qualified coach, blazing a trail as a woman in that sphere and given high praise for her role assisting manager Craig Hurley as Treaty United surprised most observers by winning the U17 WNL title last year.

Yet she speaks disarmingly about the nerves she knows will tickle and tingle until Gavin Donegan throws the sliotar in between the quartet of midfielders on Sunday, of which she, a non-stop engine, will be one.

“I can’t wait,” says Harty with genuine glee. “2018 was when Cork last won it and they had to get a new squad in completely then. This is the first time going up for a lot of us so nerves might be a thing but we’re definitely excited and looking forward to it.

“It’s a big opportunity. The build-up to it is fantastic and the day itself will be great but there’s a job to be done as well at the end of the day. It’d be a sickener to go all the way up and not perform so we’re definitely focussed on that as well.”

Cork emerged from a bruising group as table-toppers, with a better score difference than Derry, who had beaten them. That earned them a direct route to the last four and it said much that three of that quartet came from their side.

Harty believes that experience, and in particular, the physicality encountered against the first teams of Derry and Meath will stand to the younger members of the Leeside unit.

They knew what they were facing when it was the Oak Leafers who emerged to block their way to the decider. And it was looking bad when despite Harty’s prominence, they trailed by three points with time almost elapsed.

“Nightmare stuff,” she interjects with a laugh as you even begin to mention the game.

Four points on the trot, including the injury-time equaliser and winner from the stick of Joanne Casey, got them home. Harty was very emotional after the final whistle, illustrating the effort required and the value of the achievement to her. Did she think they were gone? Another chuckle and face-splitting smile.

“You’d never like to admit to that but there was a couple of shaky moments all right! You’re nervous throughout the game, not knowing what way it’s gonna go at all. We’ve a lot to work on going into the final. Puckouts were poor, scoring was poor so we’re pushing hard now in training trying to improve those things because in fairness to Joanne, she was top class in the frees but the missed opportunities we had, you’re not going to win an All-Ireland final with those mishaps.”

Casey provides real experience, having played in the senior All-Ireland Cork won eight years ago. There is a small core of players too who were involved when the Reds last secured the Jack McGrath Cup in 2018.

“We are a quiet team but there’s a load of support in the girls. Joanne, Finola, Hayley (Ryan), Katelyn (Hickey), Lauren Homan have all been there before. So they’re girls you can turn to if you are struggling mentally about nerves and stuff like that. Ask them how to deal with it and what’s it like. They’re a huge support that way and you definitely see that in them in training. They’re pushing us on, driving us on and encouraging.

“It’ll be exciting and nerve-racking but at least those girls are there to keep us calm and level-headed.”

Harty has always been a talent, scoring two goals as Cork beat a Waterford team that included Beth Carton and Brianna O’Regan to secure All-Ireland U16B honours in 2013. Impressing at schools’ level with St Mary’s Charleville, she also played minor with the county, captained Munster in camogie/shinty and shone for DCU up to Ashbourne Cup level.

Youghal man, Ken Bulman was involved with the victorious U16 outfit and is a familiar face with the intermediates this term.

“Ken knows how to get the best out of me, with a lot of other trainers, to be fair. Frances Killeen got me back onto the intermediates three years ago when they got a new panel in so I owe a lot to her as well that I’m back in the set-up and pushing on again. It’s great to have those people behind you.”

Playing senior remains an ambition and Harty draws on other legendary figures in the continuation of the journey.

“An example is Ashling Thompson (another St Mary’s product). You’re always trying to be a player like that. But you’re never at your potential. So it would be a dream of mine to play for the seniors. Whether that happens or not, who knows?

“I’ve great support. I’m very lucky that I can talk to the likes of Ashling. Julia White has been another huge support of mine. Just chatting to experienced players like that. They tell you what to do to get there, what you need to do. How to stay level-headed and whether you’re doing the right things or not. So it’s great to have those influences in your life.”

White is a fellow teacher at CETSS.

“I owe a lot to her this year. She’s been fantastic. Pre-season out running with me, hurling training. And I can ask her anything, camogie-wise and anything outside. She’s had a savage career and would have been a role model of mine growing up so ‘tis great to be able to chat to her about these things now.”

A winning point on Sunday, á la White’s dramatic, still unbelievable score in the 2017 senior decider, would do nicely.

Harty assumes the captaincy role on the pitch because of the enforced absence of Neville, who like Casey, is a long-serving member of this squad with All-Ireland senior medals in her cabinet.

“She’s a massive leader and the fact she got injured is a huge driving force for us as we could see how much it affected her and how emotionally that must be difficult for her. But in fairness to her, you wouldn’t know it now. At training and matches, she’s unbelievable. She hides that emotion. Behind closed doors she must be upset but when she’s with us, it’s full steam ahead pushing forward for the end goal. That’s a drive for us as well, to do it for her. She’s been part of the set-up from Day One.

“She’s been looking at me since she got injured to say, ‘This is your role now.’ I said, ‘Absolutely not. You’re captain and you’re gonna stay as captain to the very end.’”

If they finish with their noses in front on Sunday, will they share the walk up the Hogan Stand steps to collect the Jack McGrath Cup?

“Absolutely not. She said she’d lead us so she’s gonna do it on the day, fingers crossed.

“We’ll do it for Finola, hopefully.”