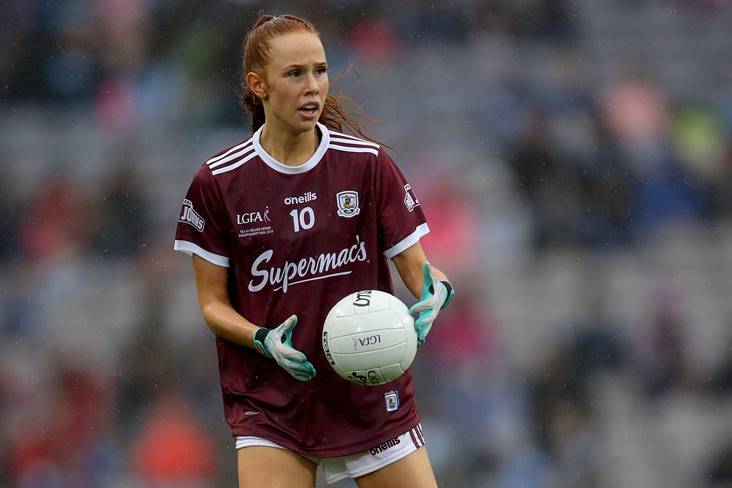 Olivia Divilly scored 0-5 as Galway earned a spot in the quarter-finals after their first win of the TG4 All-Ireland Senior Championship against Westmeath in Tuam Stadium.

The Kilkerrin/Clonberne forward also played a part in her sister Siobhan’s goal on 46 minutes that put this game beyond doubt.

Playing into the wind, Westmeath took the game to the hosts at the start with Kelly Boyce Jordan finding a gap only for an advantage not to accrue. At the other end, Ailish Morrissey got Galway off the mark on three minutes.

The visitors did get on par when Sarah Dillon converted two minutes later and when Galway fouled after the restart, the Westmeath centre forward did the necessary again to put them 0-2 to 0-1 ahead.

It was a positive start for Westmeath but they began to struggle with kick outs.  Leanne Coen levelled again, 60 seconds later, before two points each for Tracey Leonard and Olivia Divilly gave Galway a four-point cushion.

Galway nearly put distance between them on 14 minutes with a four-player move leading to Morrissey’s shot being blocked by Aoife O’Donnell.

Leonard’s free on 25 minutes made it 0-7 to 0-2 before Dillon replied with a Westmeath free. Two more Divilly scores from play, either side of another Leonard placed ball, gave the home side the full benefit of the wind with a 0-10 to 0-3 lead.

Westmeath struggled to break down Galway’s defence after the restart as Leonard and Lynsey Noone stretched the margin. And on 41 minutes, substitute Roisin Leonard marked her return by getting the first of three points. Olivia Divilly and Dillon traded scores before Morrissey added for Galway. And Siobhan Divilly reacted quickest when Olivia Divilly’s shot was blocked by O’Donnell to get the goal.