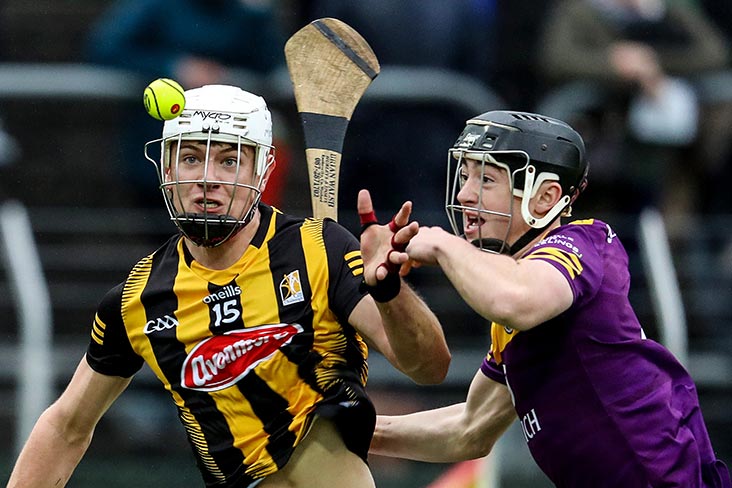 Kilkenny's Ted Dunne with AJ Redmond of Wexford during the Leinster Under 20 Hurling Championship Final at Netwatch Cullen Park, Carlow

In wet conditions, the Cats built up a 0-7 to 0-4 half-time lead and managed to hold off their old rivals in the second half. Points from Denis Walsh (two) and Timmy Clifford had the winners three up before Cian Byrne got Wexford off the mark in the 12th minute. Further scores from Andy Hickey, Walsh and Drennan extended Kilkenny's lead to six before Cian Molloy and Cian Byrne closed the gap at the break.

After Jack Redmond had reduced the deficit to two points, substitute Jack Doyle netted with his first touch to restore the Cats's six-point advantage.

The Slaneysiders responded with three Byrne frees, while points from play by Richie Lawlor, Joe Redmond and Byrne got them to within two points.

Drennan kept the scoreboard ticking over for Kilkenny at the other end, but Wexford kept plugging away and injury-time points from Byrne and Tomas Kinsella brought it down to the wire before Jack Redmond missed the chance to force extra-time.

The Cats will now meet Munster champions Limerick in the All-Ireland final on the weekend of 21/22 May.