Late goals make the difference for Donegal against spirited Cavan 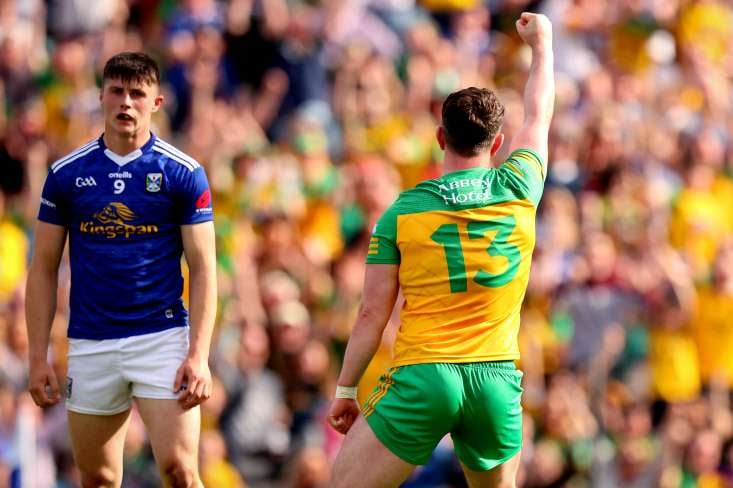 Two second-half goals were the difference as Donegal came through a battle with Cavan in Clones this afternoon to book a place in the Ulster SFC final on a 2-16 to 0-16 scoreline.

The six-point margin in the end hardly did justice to Cavan who took the fight to their hotly-fancied opponents from the moment All-Star midfielder Thomas Galligan gathered the throw-in.

With young full-forward Paddy Lynch on fire inside, the Breffni men had a 0-8 to 0-5 lead built up by the 22nd minute and nearly had the ball in Donegal’s net 10 minutes later but for Shaun Patton's brilliant save to touch James Smith’s rasping shot on to the crossbar.

The Tir Chonaill men finished out the first-half in better fashion with points via Jamie Brennan (2), Michael Murphy and Paddy McBrearty that had the sides level on 0-9 apiece come the interval.

Smith fired Cavan back in front two minutes into the restart before the points of Peader Mogan, Murphy (2) and Brennan saw Declan Bonner’s men take a three-point lead.

The Blues battled back brilliantly and were level by the 53rd minute, with Gearoid McKiernan to the fore for them, ahead of McBrearty steadying Donegal’s ship with his side’s 15th point of the day.

Bonner’s men would hit he jackpot shortly afterwards as a lofted ball into Cavan’s square was punched into the path of Conor O’Donnell and the substitute provided the low neat finish with his first touch of the day.

It was a blow Cavan wouldn’t recover from and McBrearty wrapped up the win with four minutes to go by hammering in Donegal’s second goal, moving them into the Ulster final on May 29th against either Derry or Monaghan and avenging 2020’s provincial final loss in the process.