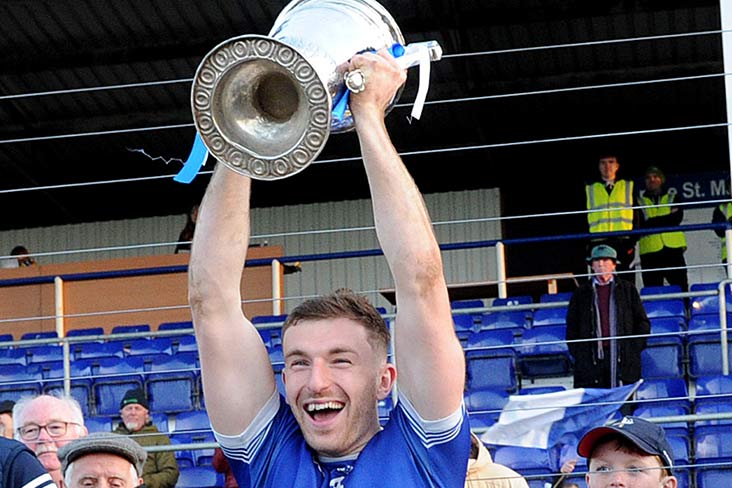 Naomh Mairtin successfully defended their Louth Senior Championship title when they proved too strong for St Mochtas in the decider at Pairc Mhuire on Sunday afternoon.

The Monasterboice men went into the game as hot favourites against the first-time finalists, St Mochtas, and they didn’t disappoint their supporters with an efficient and confident performance that ensured an upset was never really on the cards.

The experience of three previous finals, and more crucially getting over the line last year, certainly stood to the Mairtins as they produced a measured display with the clinical Sam Mulroy once again leading the charge as he finished with a tally of 1-7.

The champions always had the upper hand and aside from a brief spell midway through the first half, the Louth Village side were unable to get a grip on the occasion or their opponents and failed to produce the standard of football that brought them to this stage.

It was the ruthless manner in which the Jocks responded to this brief threat that underlined their performance. During the third quarter the took full advantage of Danny Kindlon’s black card to fire over five successive scores and establish a six point interval advantage and effectively put the game beyond their opponents.

The Mairtins made their intentions clear from the outset as, with the wind in their backs, they made sure the Mochtas didn’t get a chance to settle. The had early points to Mulroy, John Clutterbuck and Conor Whelan, while JP Rooney was denied a goal by Jason Callan during that spell.

However, credit to Kieran Quinn’s side who found their feet and responded with two Declan Byrne frees to cut the gap to one at the end of the first quarter. That left the village side in a healthy position but it didn’t last long as they game turned when Kindlon brought Mulroy down as he threatened the goal and received a black card.

Sensing their opportunity, the Mairtins piled on the pressure and points from Mulroy (2), along with two excellent efforts from Wayne Campbell and another from Conor Whelan had their side 0-8 to 0-2 ahead at the break.

Hopes of a Mochtas revival never materialised as the Mairtins continued to dominate in every sector as they crucially kept tabs on the Declan and Ciaran Byrne who were unable to influence the game as they would have wished.

With the defence giving little away, the Jocks continued to turn the screw at the other end as scores from Mulroy (2), Clutterbuck and Whelan in reply to two Declan Byrne frees had the gap at 0-12 to 0-4 at the end of the third quarter.

There was no way back for the Mochtas at that stage and the Mairtins underlined their superiority when Mulroy and Jack Murphy added further points before earning a penalty which he crashed to the net for the only goal of the game on 22 minutes. The team captain added another free before the Byrne brothers kicked consolation points at the other end.

The game ended on a sour note when Mairtins sub, Mick Fanning, was dismissed for a challenge that left Stephen McCooey with a nasty injury.