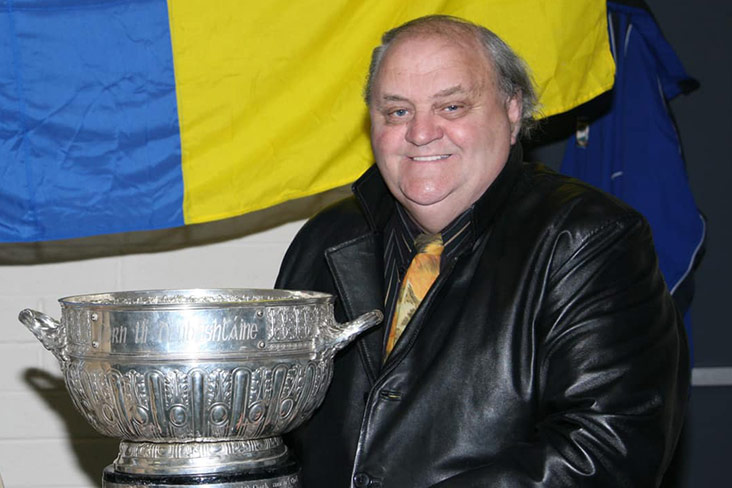 The late Vincent Daly with the Delaney Cup

The death has take place of former Longford great Vincent Daly. The St. Mary’s Granard star led Longford to their one and only Leinster Senior Football Championship title in 1968.

On their way to that Leinster Final, Longford defeated Dublin 1-12 to 0-12 in the quarter final, All-Ireland holders Meath 0-12 to 0-7 in the semi final and stunned a highly fancied Laois team in the decider, winning with ease 3-9 to 1-4. Kerry ended that great run in the All Ireland semi final, but only just. It finished 2-13 to 2-11 at Croke Park.

Word has just reached Granard of the passing of Vincent Daly after a recent illness. Vincent was a member of a famous St Mary’s football family, stretching back to the 1930’s and beyond. He played a big part in the history of the GAA in Granard and Longford, a career that started by winning the Schools’ championship in 1960.

His Longford Leader pen picture for the 1960 Schools’ final reads: Vincent Daly (11). Another youngster who has come on immensely since the start of the season. Display’s a lot of his father’s (Willie) abilities.

His ’61 pen picture read – A clever go ahead forward who is very accurate. The Longford Leader reported that Vincent ‘had the better of exchanges’ in the ’62 Schools final, bringing his Schools championship medal haul to three.

Further championship medals followed before he was selected to play on the County U18 team in 1966. The same year, he was described as one of the stars on our Junior team that reached the junior final.

Vincent played on well into the 1970’s and we will always remember his willingness to help St Mary’s celebrate the opening of our clubhouse when he brought his football mementos to put on display with the rest of our clubs history.

He was delighted to take a photo alongside the Leinster Championship (Delaney Cup) Trophy that he had received on behalf of Longford in 1968 with his son Paul that evening.

His passing will bring back memories of the important part he played in the great St Mary’s teams of the ‘60’s  and in our clubs history.

St Mary’s offer our condolences to his wife, Carmel and family Paul, Sandra, Angela and Vincent and his extended family.

Funeral details as per RIP.ie

Funeral cortege will leave his home at 11.40 on Saturday 29th for funeral mass at 12 noon in St. Mary's Church, Granard, followed with burial in Granard Kill Cemetery.

Family home is private at all times please.