"We can't bubble our players, they're amateur sportspeople" 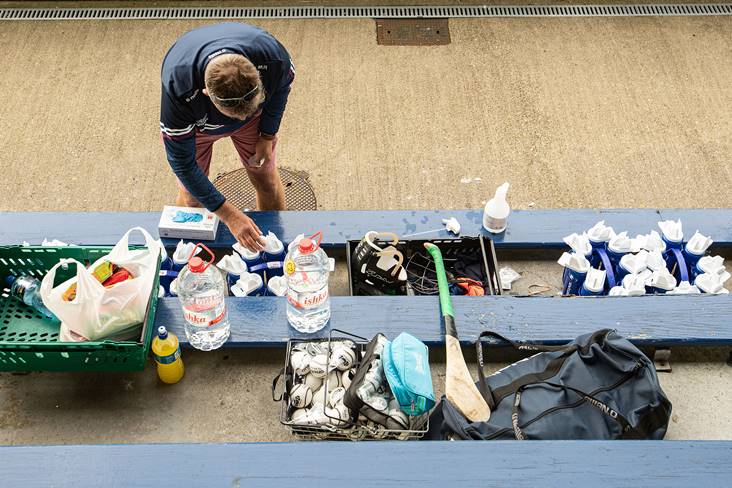 St Martin's kit man Mick Reid prepares refreshments in the stands as dressing rooms are not in use due to Covid-19. ©INPHO/Tommy Dickson.

The GAA’s Alan Milton has said while there is disappointment that Gelic Games have not been given an exemption to continue during Level 5 Covid-19 restrictions, there is an acceptance that there are unique challenges for an amatuer organisation.

The intercounty GAA championships took place at the end of 2020 while the country was in Level 5 restrictions, with the GAA given a special exemption at the time.

That exemption expired when the All-Ireland SFC final was played but there were hopes might be extended for this Spring to allow the Allianz Leagues return.

The GAA confirmed last night that this would not be the case and speaking to RTE Radio 1’s Morning Ireland the GAA’s Director of Communications Alan Milton said the association understood the rationale behind the government decision.

"It's obvious to everybody that the exemption we got last winter to proceed with the senior inter-county championships was exactly that, an exemption," said Milton.

"While it was welcome and the championships went off really well, I think the Government is dealing with a different scenario at the moment, in terms of different strains and the rates out there.

"It's a disappointment, but I think we're just going to have to knuckle down and show some of the flexibility that we showed in 2020 bracing into 2021."

Elite professional sports such as rugby and soccer continue at the moment but Milton was keen to point out that there are numerous differences between those sports and the GAA.

"We can't bubble our players, they're amateur sportspeople," he said when asked about rugby and soccer being given the green light to continue.

"They float around in the community after they train and they play. That's a given.”