Mayo's 23-year stay in Division 1 of the Allianz Football League is over after a late comeback against Tyrone in Castlebar fell short by a point.

Last year's league champions had it all to do in the second half after goals from former Aussie Rules star Conor McKenna and debutant Darragh Canavan helped Tyrone to a 2-9 to 0-7 lead at the break. When McKenna netted again after the restart, the Red Hands were nine points up, but Mayo refused to throw in the towel as a Tommy Conroy goal and three James Durcan frees reduced the deficit to the minimum.

However, time ran out on the Westerners as Tyrone, who only needed a draw to secure their top-flight status, held on for the win.

Despite losing Cillian O'Connor before the throw-in, Mayo started well against the wind with Paddy Durcan, Eoghan McLaughlin and Diarmuid O'Connor kicking early scores. But the visitors hit back with efforts from Darren McCurry, McKenna, Peter Harte and Canavan - who was a late addition to the match-day squad - to take a 0-5 to 0-4 lead into the first water break.

Mickey Harte's charges dominated the second quarter when goals from McKenna in the 22nd minute and Canavan in stoppage-time putting them firmly in the driving seat. Harte and McCurry were also on target as the hosts went 15 minutes without a score before Darren Coen slotted over a free. 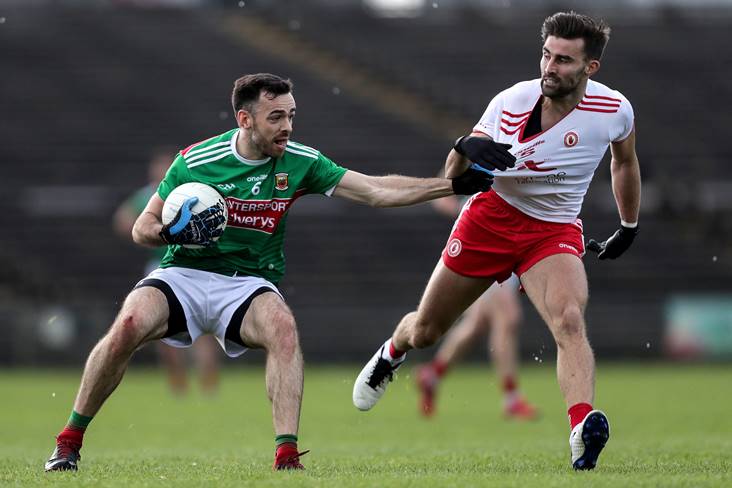 Coen pulled back two points at the start of the second half before McKenna pounced on a poor kick-out by David Clarke to raise his third green flag in two games in the 44th minute.

Tyrone lost Conor Meyler to a black card and it appeared as if Mayo would pull off the great escape when sub James Durcan landed a pair of frees to leave a point between the sides. But late scores from McCurry and McKenna were enough to get the Ulster side over the line.

Moran steps into management with Ballaghaderreen

Galway to take on Mayo in Connacht U20FC opener