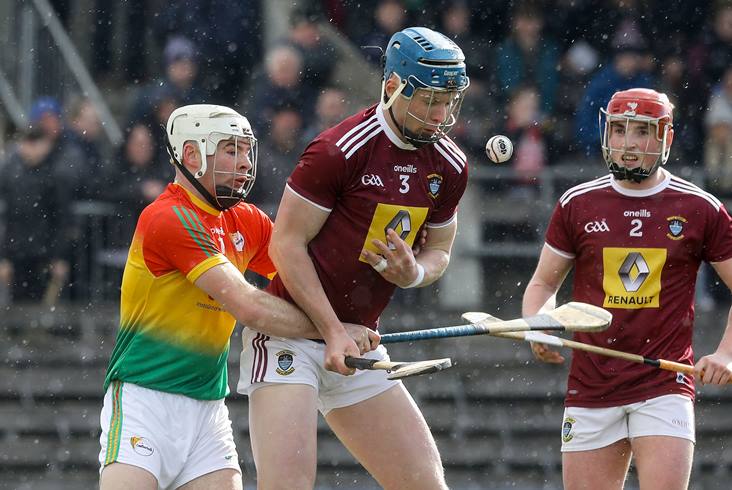 Killian Doyle scored a whopping 1-14 as Westmeath retained their Allianz Hurling League Division 1 status with a dominant performance against Carlow in this afternoon's relegation playoff at TEG Cusack Park.

Doyle, who was a late replacement for his Raharney clubmate Joey Boyle, accounted for all but one point of the Lake County's first half tally as they took a 1-8 to 0-4 lead into the break. The hosts extended their advantage after the restart before Carlow grabbed a brace of goals in the closing 10 minutes to reduce the gap to four points, but they couldn't get any closer and drop back to Division 2A for 2021 after avoiding relegation at Offaly's expense 12 months ago.

Despite playing against the elements in the first half, Westmeath scored the first three points per Doyle before the Barrowsiders levelled with one each from Marty Kavanagh, Diarmuid Byrne and Jack Kavanagh.

Doyle edged Shane O'Brien's men back in front before raising the game's first green flag in the 20th minute. Kavanagh got a point back before Westmeath scored four without reply to leave themselves in a very strong position at the interval.

Chris Nolan registered the first two points of the second half for the visitors, only for Westmeath to reply with another four-point salvo. Westmeath were 10 up and coasting when Carlow scored two goals in the 60th and 64th minutes to bring themselves back into contention. Kavanagh scored the first from a penalty and Diarmuid Byrne the second after intercepting an Aonghus Clarke backpass.

But that man Doyle settled Westmeath with a brilliant sideline effort before adding a late free to seal the win. Carlow's misery was compounded by a second yellow card for Nolan in stoppage-time.