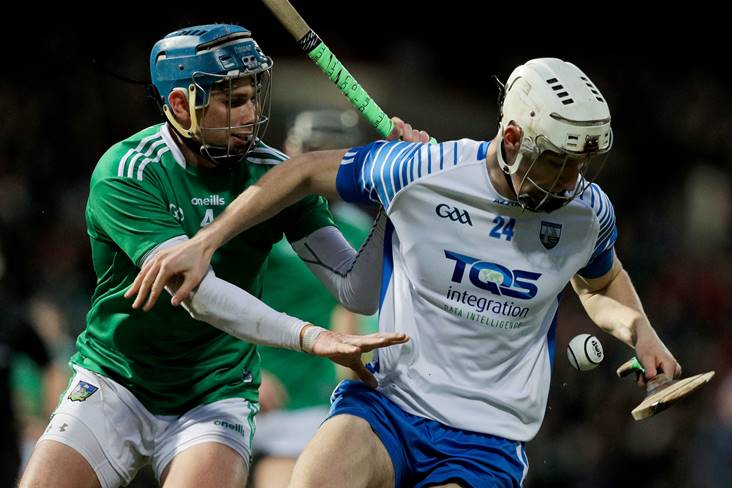 Boosted by Gearoid Hegarty’s first-half goal, holders Limerick secured their semi-final spot when making it five wins from as many outings in Group A of the Allianz hurling leagues at the LIT Gaelic Grounds this evening.

Visitors Waterford will have to be content with quarter-final berth after they finished four points in arrears in this rescheduled round 3 fixture.

Limerick led by 0-5 to 0-4 with 20 minutes gone on the clock and Graeme Mulcahy subsequently sent over a brace to extend their advantage to three points by the 26th minute.

Two minutes later, David Dempsey fielded a diagonal delivery from Cian Lynch and laid the ball off to the inrushing Hegarty who fired the sliotar past Shaun O’Brien in the Waterford goal from close range.

Pauric Mahony replied with a converted free for the Deise but Lynch and Dempsey combined again at the opposite end of the field for the latter to raise a white flag.

The first-half finished with the Treaty County 1-8 to 0-7 to the good with Jamie Barron the only player from the visiting team to register a score from play.

Half-time Waterford substitute Peter Hogan doubled their scores from play tally with the first score of the second-half while a goal chance fell to another substitute, Jack Fagan.

Tom Morrissey played a key role in clearing the danger on that occasion while scores from Aaron Gillane (free) and David Reidy pushed Kiely’s charges into a five point lead.

The impressive Iarlaith Daly pulled a point back for the visitors but Limerick showed no signs of letting up and were eight points clear (1-16 to 0-11) before Fagan threw Liam Cahill’s men a lifeline with a fantastic individual goal in the 54th minute.

Goalkeeper O’Brien pulled off a great save to deny Gillane a goal at the expense of a point shortly after.

The influential Hegarty then brought his personal tally for the evening to 1-5 before Barron, Stephen Bennett and Mahony tagged on late consolation scores for the Deise.