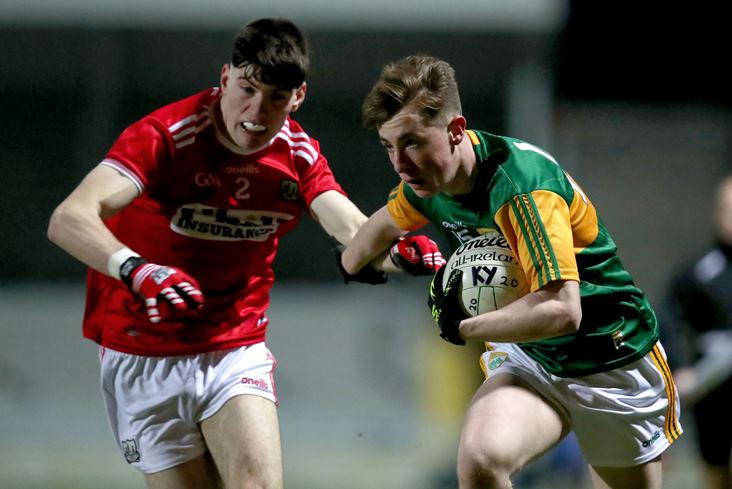 Kerry produced the second-half goods to dethrone Cork in Tralee tonight and claim the Munster U20 football championship title.

John Sugrue’s side kicked a dozen points after the break to sink their neighbours whom had taken the lead with 1-2 from Blake Murphy in the run up to half-time in this fascinating derby decider.

Kerry hit the ground running after the restart though and drew inspiration from Ruaidhri Ó Beaglaoich (0-5) and sub Sean Quilter to avenge last year’s final defeat against this opposition.

Despite Cork taking in a 1-6 to 0-5 half-time lead it was the home side that had made the better start to this contest, building up a 0-3 to 0-1 lead through the points of Ó Beaglaoich, Patrick Darcy and Killian Falvey before the Leesiders stormed in front via points from the electric Mark Cronin (2) and Jack Murphy by the 17th minute.

Kerry would see a goal opportunity for Darcy cleared off the Cork goal line afterwards and instead had to settle for a point which was wiped out five minutes before the break.

Some patient build up play from the holders afforded joint-captain Murphy the time and space to rifle to the Kingdom's net and two more points from the deadly corner-forward left a difference of four points on scoreboard at the interval in favour of the All-Ireland champions.

The hosts had been guilty of missed opportunities during the opening half-hour and they weren’t going to let them haunt, making an excellent start to the resumption to outscore their counterparts by 0-6 to 0-1.

Sean Horan’s sole point of the night was what moved Sugrue’s charges in front prior to a long range effort from Cronin levelling matters (0-11 to 1-8) with 13 minutes left.

Kerry came into their own from there, with Ó Beaglaoich outstanding to the finish, as he earned frees for Paul Walsh to pop over and a converted mark from the former moved the hosts into a lead they’d never surrender.

Austin Stacks man Quilter got in on the act with a point of his own to all but ensure a 27th title in this grade (formerly U21) for the Kingdom.

Wexford underage football final postponed because no goalposts were available