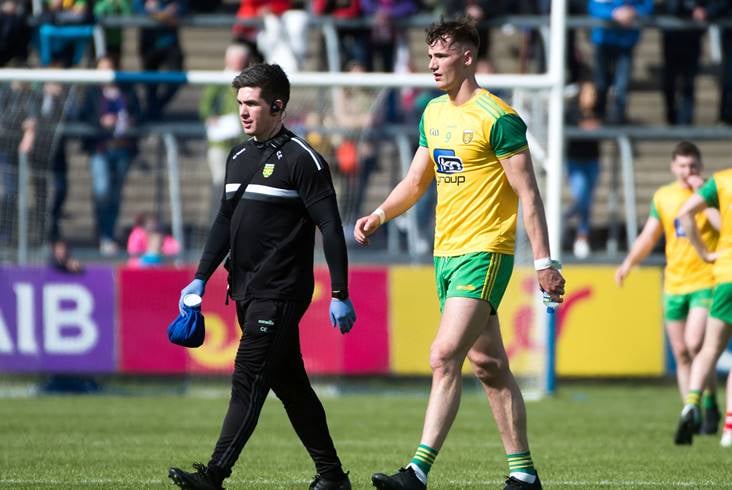 Donegal ace Jason McGee faces an anxious wait until mid-March to learn if he has any chance of lining out against Tyrone in the opening round Ulster Championship tie on May 17.

In the wake of undergoing hip surgery in Coventry 10 days ago, the 21-year-old midfielder has no chance of featuring for Declan Bonner’s side in next year’s Allianz League campaign.

And furthermore, a major doubt surrounds McGee’s availability for the clash against Mickey Harte’s charges in just over five months’ time.

“I have to go back to Coventry in three months’ time for the surgeon to check out on my degree of recovery from the operation,” revealed McGee, who is currently on crutches which he will continue to use until shortly before Christmas.

“The surgeon’s reaction will give me a good idea of whether I might be able to go back to training towards the end of April.

“But if I not able to train at 100 per cent by that time, I will have no chance of making the Donegal panel, never mind the team, for the game against Tyrone.

“Obviously, I have no chance of playing in the league and that’s a major disappointment for me.

“And, if I don’t make the panel for the Tyrone game, I’ll just have to focus on trying to get back at some stage for next year’s championship,” added McGee, who was drafted straight into the Donegal senior panel after finishing playing in the minor grade in 2016.

Regarding his hip issue, the Cloughaneely clubman was advised that undergoing surgery was the only way for his ongoing serious problem to be resolved.

“There is a sports clinic in Coventry which specialises in operating on these type of injuries, and that is why the Donegal County Board decided that I should have the operation there,” he pointed out on the decision to have the work carried out across the water.

“I’ve had this problem with my hip for the last two years, and so it was something that I had to have seen to as it was interfering far too much with my football career.

“As well as the hip problem itself, I was having related issues with my back and my hamstring, and the combination of the injuries made it very difficult for me to train.

“It would also take me much longer than other players to recover from the work put in during training, and my back would also be very sore for a good while afterwards.”

With regard to game time, McGee said: “Playing matches was also a big struggle for me, as the first 10 minutes would be very difficult before my back loosened out a bit afterwards.

“But then again after matches I would have to put up with a huge amount of discomfort from my back.

“In my first year with the Donegal seniors in 2017, I played in all the championship matches and all but the league games against Monaghan and Tyrone due to a shoulder injury which I picked up against Cavan.

“However, because my back started to give me trouble, I wasn’t able to play in any of the senior championship games in 2018.

“This year, I played in all the championship games, but I had to come off because of injury in the first half of the games against Tyrone, Mayo and Kerry.”