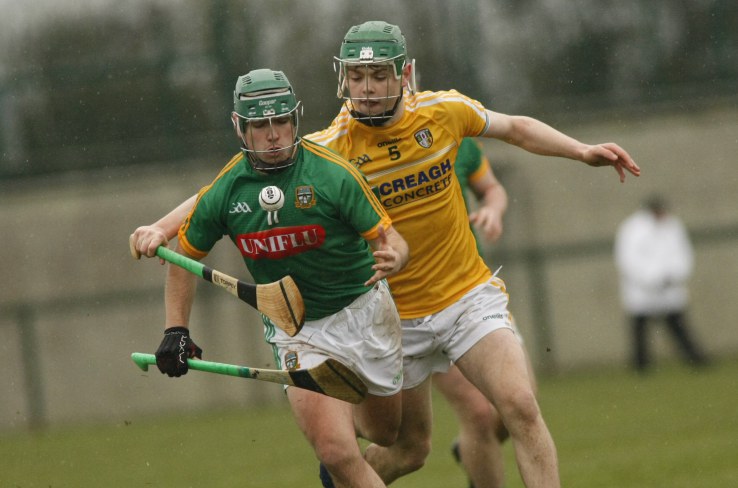 Antrim ran out comfortable winners over Meath at Pairc Tailteann.

Antrim coasted to an 18-point success over Meath in today’s opening round Kehoe Cup clash at Pairc Tailteann.

Antrim were never headed and it was in the second quarter that they put considerable distance between themselves and the hosts.

Antrim were eliminated at the group stage of the Joe McDonagh Cup in the summer. Meath beat Down in the Ring Cup final this year.

Darren Gleeson's men were 17 points to the good at the break and Meath can take some credit for almost matching them in the second-half.

Conor Johnston finished with 10 points to his name while nine Antrim players were on the scoresheet at the finish. Six Meath players pitched in with scores Nicky Weir's side, but they weren't afforded the goal chance the Glensmen availed of.

Sub Jack Regan netted the subsequent penalty to leave the board at the opposite end of the ground reading 1-6 to 2-17.

Antrim responded well and moved 19 points clear by the 44th minute when Michael Bradley goaled to leave it 3-20 to 1-7.

With all semblance of a contest gone, Meath outscored Antrim by 0-8 to 0-7 in the time remaining. The pick of the home side's scores came from James Toher, pointing from inside his own half, one of a quartet of scores the Trim-man registered after the break.

Antrim almost got in for a fourth goal, in the 50th minute, but Michael Bradley just failed to connect with Johnson's deft cross.

The most notable action of the time remaining was Meath 'keeper Charlie Ennis' block on Conor McCann's goal attempt. Johnston landed the subsequent 65 as the light and the temperature dropped.

Both teams fielded very different line-ups from the NHL Div 2 A meeting between the sides in the spring when Antrim prevailed by a point at Trim.

The sides were tied twice in the opening 12 minutes before Antrim gradually eased clear, incrementally increasing their advantage as the half progress.

Eight different players scored for the Glensmen in the first-half with their opening goal arriving in the 23rd minute when Conor Johnston placed Alex Delargy at the old swimming pool end.

The second goal came courtesy of a Donal Nugent 31st minute free awarded after Ryan McCambridge's run was halted. Antrim added four more points to lead by 2-16 to 0-5 at half-time.

Jack Walsh's 18th minute point from distance was the highlight of the opening 35 minutes from a Meath perspective. It left the home side 0-3 to 0-5 in arrears. The Royals were outscored by 2-11 to 0-5 in the second quarter.

Next weekend sees Antrim travel to Wicklow while Meath travel to the Garden County in two weeks time for the second round of fixture in the group stage..