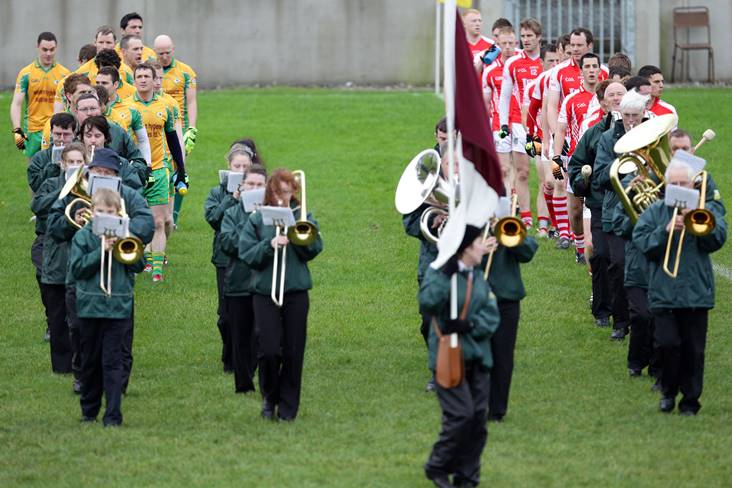 Corofin and Tuam Stars players walk behind the band before the 2011 Galway SFC final. ©INPHO/Cathal Noonan.

The experienced Jamie Murphy bagged 2-1 as Tuam Stars saw off Moycullen by 3-11 to 1-12 at Pearse Stadium yesterday to set up a Galway SFC final date with seven-in-a-row chasing Corofin on October 20.

Tuam's win came a year after they were involved in a relegation playoff with Caltra. With midfielder Mark Lydon to the fore, Moycullen opened up an early 0-6 to 0-2 lead before Murphy's first goal in the 27th minute reduced the deficit to the minimum. But Moycullen hit back with a major of their own from captain Dessie Conneely to take a 1-6 to 1-2 lead into the break.

Moycullen had one foot in the final when points from Peter Cooke and Conneely extended their lead on the restart, but traditional giants Tuam then reeled off 2-5 without reply to turn the game on its head, with Murphy and Ben O'Connell accounting for the goals.