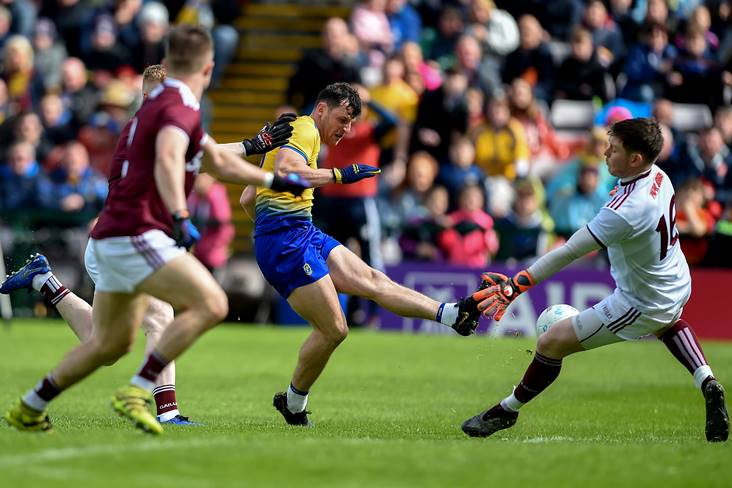 Roscommon dominated the second half to beat Galway by 1-13 to 0-12 in the Connacht football final at Salthill.

With Galway man Anthony Cunningham - now a provincial winner in both codes - at the helm, the visitors outscored their rudderless hosts by 1-8 to 0-2 after the restart as the holders utterly imploded. The first half was played in teeming rain but the sun came out for the second, the changeable weather reflecting events on the field of play.

It really was a remarkable turnaround on football’s biggest day in the west, Diarmuid Murtagh brilliantly dispatching the game’s only goal on 40 minutes as the victors overturned a five-point interval deficit to claim the Nestor Cup and a place in the Super 8s. Their over-eager supporters even got to rush on to the pitch to celebrate victory - twice!

Kerry import Conor Cox lofted over five points for the Rossies, who have won this provincial title the hard way, overcoming Mayo away from home at the semi-final stage before stunning Galway in their own back yard. Kevin Walsh’s charges go into the fourth round of the Qualifiers with their tails firmly between their legs.

The losers bossed the last 15 minutes of the opening half, reeling off five unanswered points to lead by double scores at the short whistle, 0-10 to 0-5.

The defending champions made two late changes to their starting XV, with Ruairí Lavelle replacing Bernard Power in goal and Peter Cooke coming in at corner forward for Danny Cummins, but it was the Rossies who struck first via Conor Devaney’s left foot, Michael Daly replying in kind before wing back Ronan Daly restored the visitors’ lead in front of 17.693 spectators.

Antaine O Laoi and Shane Walsh pointed to edge the holders in front for the first time and Fiontán Ó Curraoin quickly made it double scores, 0-4 to 0-2 after nine minutes. Walsh (free) cancelled out Cox’s classy point but Roscommon were level by the 21st minute when Murtagh hit an excellent point following a Cox free.

O’Laoi’s second sent Galway back in front and quickfire points from Walsh (two frees) and substitute Eamonn Brannigan had the gap at four, Gareth Bradshaw coming forward to close the first-half scoring with an exquisite strike. Roscommon came back out like men transformed. Unfortunately for Galway, so did they!

Five minutes after the restart, Murtagh calmly tucked a superb left-footed shot past Lavelle at the near post from a tight angle to bag his first-ever championship goal; points either side of that from Niall Kilroy and Cox had the Rossies level by the 41st minute – 1-7 to 0-10!

Murtagh’s free on 50 minutes pushed the rejuvenated Rossies back in front and Galway’s first second-half score arrived off the boot of Daly six minutes later as the sides were level for the sixth time. Rscommon now kicked on...

Wing back Niall Daly and midfielder Shane Killoran popped up with points for the visitors to leave two between the sides with an hour played.

Murtagh swung over a free four minutes from the end and Walsh replied from a ‘45’ following a vital Darren O’Malley intervention. Cox blasted over the game’s last two points as Roscommon won their 24th Connacht title and second in three years while Galway became the fourth Division One side to go into the Qualifiers.

For the second time inside 24 hours, a Galway export has plotted the downfall of his native county ... Mattie Kenny in hurling yesterday and former hurling boss Cunningham in the football today. Not a great weekend for the Tribe. But at least two Galway men will be happy with their lot tonight...