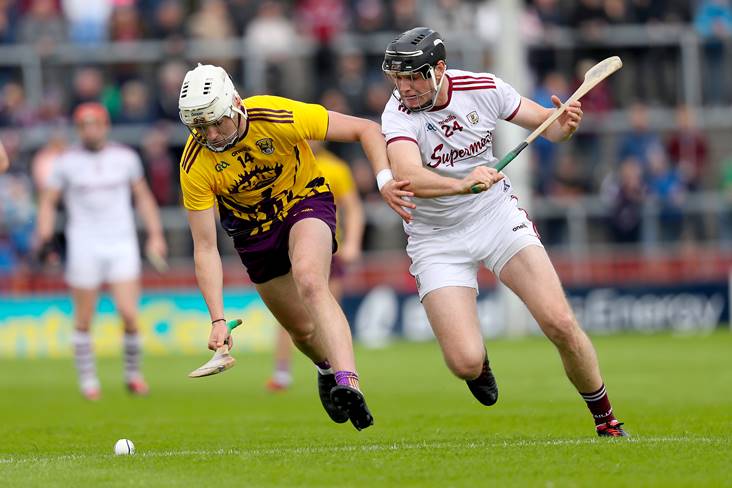 Davy Fitzgerald was banished to the stand as Wexford came from six points down to secure their second draw in the Leinster SHC with Galway at Pearse Stadium.

The Wexford manager was incensed after one of his players was knocked to the ground in an off-the-ball incident and exchanged verbals with Westmeath linesman Mickey Dan Murtagh before being dismissed by referee Johnny Murphy in the 44th minute. Trailing by 0-5 to 0-11 at the time, the incident lit the touch paper for a superb Wexford comeback that saw them reel off seven points without reply before Jason Flynn came to Galway's rescue with two late points.

In an error-ridden game that saw the sides share 30 wides between them (17 for Wexford, 13 for Galway), Cathal Dunbar could have won it at the death for the visitors, but instead of taking his point, he went for glory and Galway 'keeper Colm Callanan was equal to the task.

After two rounds, the Leinster SHC remains wide open. Wexford have banked two points from trips to Parnell Park and Salthill and can now look forward to welcoming Carlow and Kilkenny to Innovate Wexford Park. while Galway, who were first round winners over Carlow, are on three points with tough away games to come against Dublin and Kilkenny.

Micheal Donoghue's charges made the most of wind advantage in the first half to storm into a 0-6 to 0-0 lead after 17 minutes. Continuing to deputise for the injured Joe Canning on the fress, Niall Burke gave them a fourth-minute lead and Jason Flynn doubled it three minutes later. Conor Cooney was then denied a goal by Mark Fanning, but as Lee Chin was missing chances at the other end, Galway extended their advantage to six through efforts from Conor Whelan and Niall Burke.

Chin eventually opened the visitors' account from a difficult free and by the 33rd minute, the margin was down to four points thanks to an Aidan Nolan point from play and two more Chin frees. But with Conor Cooney and Whelan on target, the 2017 All-Ireland champions took a 0-10 to 0-4 lead into the break. The Model County resumed with a point from Diarmuid O'Keeffe after barely 15 seconds, but three points from Jason Flynn, who had by then taken over the free-taking duties from the substituted Niall Burke, only tightened Galway's grip on proceedings.

But the sideline incident involving Fitzgerald seemed to give Wexford a new lease of life as they immediately closed the gap with a brace of Chin frees. Cathal Mannion grabbed his only point in the 51st minute, but the hosts then went nearly 20 minutes without scoring as the purple and golds roared back into contention.

Chin (two frees), Rory O’Connor (two from play), Cathal Dunbar, Conor McDonald, and Shaun Murphy scored seven unanswered points between the 52nd and 64th minutes to give them the lead for the first time, 0-15 to 0-14.

Flynn levelled from a '65 and then scored a contentious point from play to restore Galway's lead, only for Liam Og McGovern to level it near the end.