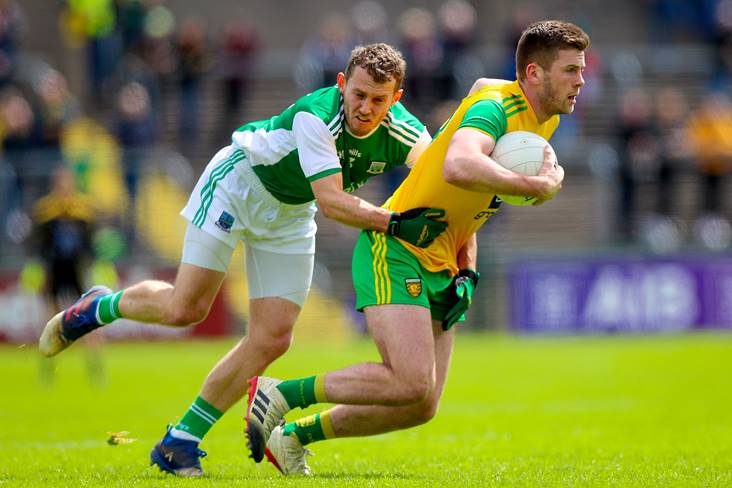 The returning Paddy McBrearty and Jamie Brennan scored nine points between them as Donegal saw off a resolute Fermanagh at Brewster Park to set up a mouth-watering Ulster SFC semi-final against Tyrone in a fortnight's time.

Making his first competitive appearance for the Allianz League Division 2 champions since rupturing his cruciate ligament against the same opponents in last year's provincial final, McBrearty posted 0-5, while Brennan chipped in with 0-4 as Declan Bonner's men eventually found a way past the hosts' defensive set-up.

Donegal initially struggled against the blanket defence and trailed by 0-0 to 0-2 after 18 minutes. But they put in a strong second quarter to lead by 0-5 to 0-4 at the interval.

Fermanagh refused to go away in the second half and remained in contention until the closing stages when the visitors grabbed the last three points to put the result beyond doubt.

Fermanagh manager Rory Gallagher's attempts to frustrate Donegal worked in the early stages as they forced the Ulster champions into making some basic mistakes. After a couple of early wides by the visitors, championship debutant Ultan Kelm fisted the wind-assisted Erne County into a fifth-minute lead. Their advantage was doubled seven minutes later Sean Quigley landed a free.

Donegal eventually opened their account in the 18th minute through Brennan and got their noses in front after 25 minutes thanks to a brace of McBrearty frees. Leo McLoone was also on target before the home side regain parity through efforts from Ryan Jones and Ciaran Corrigan. However, a long-range Jason McGee point gave the winners a slender lead going into the break.

With the wind behind them in the second half, Donegal went three up for the first time after 39 minutes thanks to points from Brennan and Michael Murphy. Fermanagh reduced the deficit to the minimum again before veteran Donegal defender Paddy McGrath was fortunate to escape with just a yellow card for a high tackle on Conall Jones.

McBrearty fisted the Tir Chonaill men two clear in the 58th minute after the home defence had failed to deal with a high ball from Murphy into the square. With Sean Quigley forced off through injury, Conall Jones took over the free-taking duties, but he dropped one short and a quick Donegal counterpart culminated in a crucial Ciaran Thompson score.

Michael Langan made it a four-point game before a 66th minute Jones free left a goal in it once again.

As the game ticked into injury-time, Langan got in a vital block on Daniel Teague to deny him a goal and that proved to be Fermanagh's last chance as the visitors closed out a hard-fought win with late scores from McBrearty (with the fist), Murphy and Brennan.