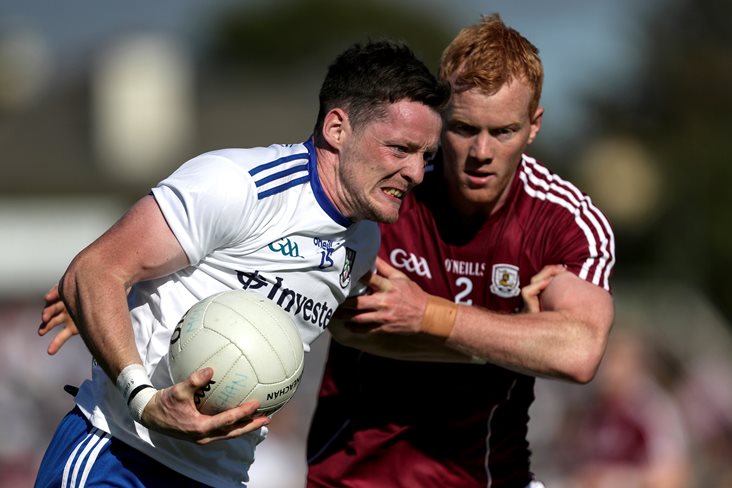 Monaghan are through to their first All-Ireland semi-final since 1988 after a stunning double-scores victory over Galway in Salthill, 0-16 to 0-8.

The win sees the unbeaten Farney County top their Super 8s group, with five points from six, to seal an all-Ulster meeting with either Tyrone or Donegal at Croke Park next Sunday. Today was the fourth time Monaghan faced Division One opposition in this year's championship and they won three of those games, drawing the other (against Kerry 13 days ago).

Galway were already through to the last four but had to dodge defeat in this game to avoid a clash with holders Dublin in seven days. But they never showed up against ravenous opposition, for whom Ryan McAnespie and Dermot Malone stood out, although the entire visiting team led by example.

The pitch invasion after the final whistle as Pearse Stadium became a sea of white and blue summed up what this meant to one of Ireland's smallest and proudest counties. Both sides finished with 13 men - the winners lost Drew Wylie and Colin Walshe to second yellow cards, while Galway captain Damien Comer suffered a similar fate and Sean Kelly picked up an injury with all the home side's substitutions already made.

Malachy O'Rourke's men had the better of the first half, playing into the wind, and should probably have been further than two points ahead at the break, 0-7 to 0-5

Eamonn Brannigan had the hosts ahead inside a matter of seconds as they began purposefully and Conor McManus posted a Monaghan wide before Fintan Kelly equalised on two minutes after McAnespie opened up the Tribe defence.

McManus fluffed a simple, 13-metre free from in front of the posts, hitting the woodwork, but his Clontibret clubmate Vinny Corey got on the end of a patient Farney move to nudge the visitors ahead for the first time on six minutes - a lead they would not relinquish.

Karl O'Connell missed another Monaghan chance as the Ulster county struggled to make their early superiority tell but Shane Walsh also spurned an easy Galway free before Darren Hughes punctuated a tremendous Monaghan move with a wonderful point from distance into the wind on eleven minutes.

Ryan Wylie m messed up a Monaghan goal chance with an attempted chip when he probably should have fisted his point to increase the gap to three and it was a two-point swing when Shane Walsh stroked over a Galway free on 18 minutes to close the gap to the minimum, 0-3 to 0-2.

Most of the visiting team were involved in an excellent move that got the outstanding McAnespie in behind the Galway defence and the Emyvale man was happy to take his point, 0-4 to 0-2. Captain Walshe - a late addition to the starting team - registered the fifth Farney point off the outside of his boot but Peter Cooke replied instantly with a sensational long-range score as the Connacht champions refused to give up (just yet).

McManus' 28th-minute free edged the visitors back into a double-scores lead, 0-6 to 0-3, and McAnespie was on hand to quickly add the next score after a wonderful dummy and run - 0-7 to 0-3 - but Gary O'Donnell quickly pulled back a fourth Galway point at the other end. It had been all Monaghan and their lead after half an hour was a fragile on at just three points…

Walsh made things tighter with his second pointed free and that score had the hosts within striking distance as the short whistle sounded.

McManus stretched the Monaghan lead to three within two minutes of the restart when he fisted over but once more Galway refused to panic, the marauding Comer hitting an instant reply to keep them right on the visitors' heels, 0-8 to 0-6.

There were four points between the teams when Hughes and McManus (free) brought the Farney tally to ten and two-times All Star McManus then lofted over a superb free to make it 0-11 to 0-6 as the Monaghan supporters found their voices.

The outstanding Dermot Malone restored the five-point cushion after Brannigan had pointed for Kevin Walsh' men and it was breathless stuff as Ian Burke again drew the hosts within four, 0-12 to 0-8.

With over 15,000 in attendance, the scores kept coming and McAnespie's third from play had the away team five clear at the three-quarters stage.

With 13 minutes left, another McManus free pushed the Farney men six ahead; a trademark Beggan free from 60 yards flew high and handsome between the posts as Monaghan moved seven ahead with just eleven minutes left. Lavelle denied Carey a goal on the hour and Walshe repelled Galway when they came looking for a goal with four minutes to go…

Monaghan were reduced to 14 men when Wylie left the fray with a second red card but they also got the next score courtesy of the magnificent McAnespie - his fourth of the day! Comer and Walsh also went for early showers after each also getting their second yellows of the evening

Both teams are through but it's Monaghan who top Group One and Kerry are out of this year's championship.