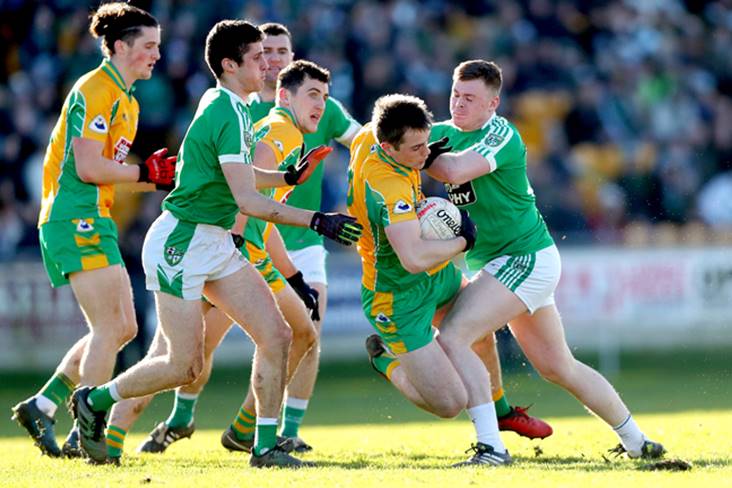 Despite being forced to play practically the entire game with 14 men, Corofin edged out Moorefield in todays All-Ireland Club SFC semi-final at OConnor Park.

The winners lost full-forward Martin Farragher to a red card in the 2nd minute but Liam Silke netted the games only goal in the last minute of normal time to secure a hard-earned 1-6 to 0-6 win for the Galway and Connacht champions.

Eyebrows were raised early on when referee Derek OMahoney reached for the red card after Farragher lost out in an aerial battle with Moorefield full-back Liam Healy.

Healy was left holding his head on the ground following the tussle but contact from the number 14 appeared to be minimal and it looked a harsh decision against him.

The sending-off was the main topic of conversation following a low-scoring opening period which ended with the sides deadlocked on two points apiece.

Chances were limited at both ends of the field but Micheal Lundy did spurn a gilt-edged goal scoring opportunity on the stroke of half-time.

Despite their numerical disadvantage, Corofin made all the early running in the second-half and sent over three unanswered points

With Silke keeping a close watch on Eanna OConnor and the evergreen Kieran Fitzgerald mopping up plenty of loose ball, it was 0-5 to 0-2 in favour of Corofin at the three-quarter hour mark.

Moorefield then lost the services of Adam Tyrell to a black card but Eanna OConnor broke their second-half duck from a free in the 48th minute and Ross Glavins charges followed that up with two quick fire points to draw level with 10 minutes left on the clock.

The influential Gary Sice restored a one-point lead for the men from the west via a free in the 52nd minute but Cian OConnor replied three minutes later to tie the score at 0-6 apiece with five minutes remaining.

A Kevin Murnaghan foul on Ian Burke gave Sice a chance to put his side back in front but his effort dropped short.

Corofin's disappointment was short-lived, however, as moments later Silke who was forced to miss out on todays Sigerson Cup final with UCD - roamed forward to get on the end of a fine move and finish to the back of the Moorefield net.