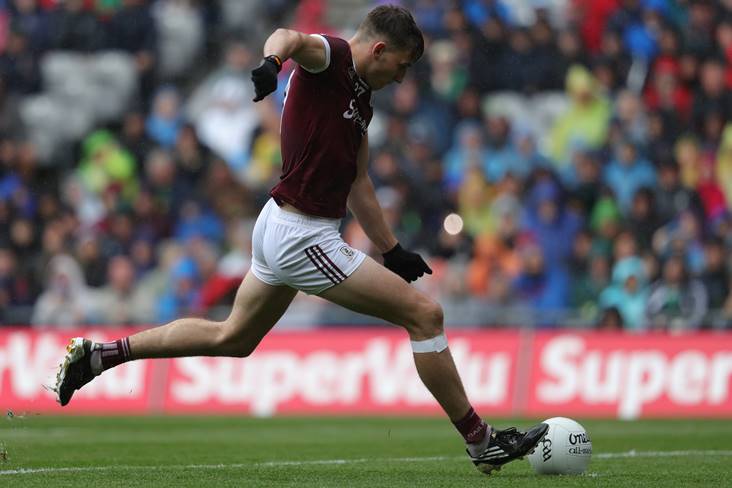 History was made at Croke Park today as Galway beat Armagh 4-1 on penalties to advance to the All-Ireland SFC semi-finals.

The teams could not be separated after almost 80 minutes of normal-time, and 20-plus minutes of extra-time, so it took a penalty shoot-out to find a winner as the Connacht champions finally killed off Armagh with clinical spot kicks from Shane Walsh, Damien Comer, Rob Finnerty and Matthew Tierney to set up a last-four date with Derry on July 9.

Unfortunately for Kieran McGeeney's side, two of their three penalties were off target. Stefan Campbell blazed wide, Rian O'Neill tucked away his and Conor Turbitt clipped the posts before Tierney decided the shoot-out.

It took a monster Rian O'Neill free in the 79th minute to prolong a truly extraordinary contest as Armagh came from six points down in injury-time to force extra-time (1-17 to 2-14) after Aidan Nugent and substitute Conor Turbitt were gifted a goal each by the Galway defence.

Nugent, along with Galway captain Sean Kelly, received red cards from referee David Coldrick following an unsavoury melee that erupted at the end of normal-time.

It was Armagh's second red of the day as Greg McCabe was sent off in the 62nd minute for a poor challenge on Tierney, who was taken off with a 'blood injury' as a result.

Johnny Heaney's 41st minute goal had put Padraic Joyce's team 1-8 to 0-8 to the good as they pushed for home with Walsh and Comer to the fore.

But back came the Orchard County with their large support willing them on. Rory Grugan and Galway's Cillian McDaid traded goals during extra-time as the sides went tit-for-tat.

Midfielder McDaid proved to be the Tribesmen's hero, scoring a point to bring the game to penalties - 2-21 to 3-18.