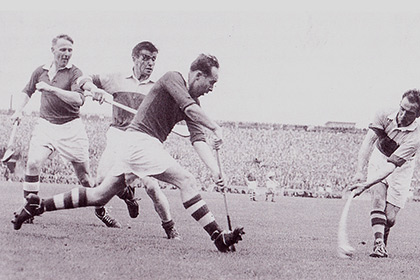 Action from the 1954 All Ireland hurling final. Players from left are Gerry O'Riordan Cork, Tim Flood Wexford, John Lyons Cork and Wexford's Bobby Donovan.
The passing of three-time All-Ireland winner Tim Flood has been the source of much sadness in Cloughbawn and Wexford GAA circles.

The 87-year-old, who passed away today (Thursday 3rd July), was a leading light in Wexford's golden era in the fifties.

He first came to prominence in 1949 when playing a leading role as Cloughbawn captured the Wexford SHC title for the first time ever while he featured on two losing All-Ireland final teams in 1949 and '54.

It was a case of third time lucky for Tim and the Model County in 1955 and he starred at left corner-forward on the team that defeated Galway to collect the county's first All-Ireland SHC title since 1910.

The following year he lined out at left half-forward as the Slaneysiders retained the Liam McCarthy Cup when getting the better of old rivals Cork in what is still regarded as one of the greatest ever finals.

In 1960 Tim added a third Celtic Cross souvenir to his medal collection and he brought the curtain down on his illustrious inter-county career shortly after the 1962 final defeat by Tipperary.

Son Sean, meanwhile, inherited his passion, and skill, for the small ball code and won an All-Ireland medal in 1996.

Unfortunately, an injury sustained in the semi-final win over Galway that year ruled Sean out of Wexford's Liam McCarthy Cup victory over Limerick.

An avid musician, Tim was the mainstay of the well-know Castleboro Ceili Band while, following his retirement from hurling, he was heavily involved in sheepdog trials, and represented Cloughbawn, Wexford, Leinster and Ireland on numerous occasions, appearing on TV shows such as 'One Man And His Dog'.