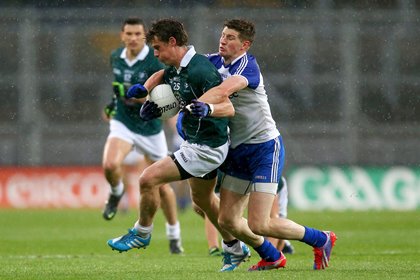 Kildare's Emmet Bolton and Darren Hughes of Monaghan ©INPHO/Ryan Byrne
Monaghan beat Kildare by 2-16 to 2-14 after extra time in an energy-sapping encounter to bury their 84-year Croke Park hoodoo.

A goal from Christopher McGuinness in the first period of extra time was the decisive score as the Division Two winners booked an All-Ireland quarter-final date with Dublin next weekend.

Conor McManus's injury-time free meant the sides were level at the end of normal time: Monaghan 1-13 Kildare 2-10. The Lilywhites seemed to have plundered victory when striking three successive points between the 63rd and 70th minutes to edge in front but the northerners kept going and got the levelling score they deserved right at the death.

A crowd of 26,584 witnessed this thrilling Round Four Qualifier on a dark, wet and miserable evening on flooded Jones Road, where both sets of players delivered some great football in extremely difficult conditions. The action commenced at 7pm and it was 9:17pm when the final whistle sounded on Kildare's season as Monaghan won at GAA HQ in the championship for the first time since defeating the same opposition in the 1930 All-Ireland semi-final.

The Lilywhites led by 2-5 to 0-8 at half time thanks to a brace of goals from Emmet Bolton, who realistically was always going to start this match. The Eadestown clubman, donning the No.25 shirt, pounced in the 20th and 25th minutes to put his team on the front foot. His dismissal on a black card shortly into the second half was a real turning point in the match.

Between the two counties, there were seven changes to the starting teams named during the week: for Kildare, Hugh McGrillen, Emmet Bolton, Paddy Brophy and Hugh Lynch replaced Mick Foley, Mick O'Grady, Niall Kelly and Tomas O'Connor; for Monaghan, Conor Boyle, Chris McGuinness and Thomas Kerr got the nod ahead of Ryan Wylie, Stephen Gollogly and Dermot Malone.

Four points were shared during the opening eight minutes. Conor McManus (free) opened the scoring and the Lilywhites replied with points from Alan Smith and Bolton before McGuinness made it 0-2 apiece. The magnificent Dessie Mone's great solo run resulted in a poor Monaghan wide and Farney goalkeeper Rory Beggan also uncharacteristically fluffed two early strikes from a free and a '45'.

Eoghan O'Flaherty's right-footed free from the wrong side edged Jason Ryan's charges back in front in the twelfth minute; at the other end, Paul Finlay smacked a shot to the left and wide off his left boot. McManus' long-range free was Monaghan's fourth wide inside the opening quarter of an hour.

The sides were level again at the midway stage in the first half as Finlay nonchalantly stroked over a free after a foul on Darren Hughes. Boyle followed up with another Monaghan wide and the border county were made to pay for their wastefulness when Bolton sent a rocket off his left foot to the corner of the net after taking a pass from Smith: 1-3 to 0-3 after 20 minutes!

Wizardry from All Star attacker McManus earned Monaghan a free, which Finlay tapped over the bar to close the gap to two but the Lilywhites replied with a fisted Bolton goal, Cathal McNally this time the provider in the 24th minute. Darren Hughes pulled back a point for the beaten Ulster finalists, who were stunned to trail by 2-3 to 0-5 with ten minutes left before the break.

McManus won and converted a free but O'Flaherty benefited from more good work by Smith to reply for the Short Grass County. Monaghan's struggles were epitomised by a Finlay wide before Smith sent a shot to the right and wide at the other end as we approached the half-hour mark with four points still between the sides, 2-4 to 0-6.

Ollie Lyons finally picked up a yellow card for his latest foul on McManus and Finlay stroked over the subsequent free from 40 metres to reduce the arrears to three points with four minutes left before the break. A minute after an apparent foul on McManus went unpunished, Padraig O'Neill lofted over a Kildare point at the other end.

McGuinness was taken down as he went to pull the trigger and Monaghan were awarded a 34th-minute free-in. Somehow, the perpetrator of the foul, Bolton, went unpunished with a black card seeming certain. No card was forthcoming from referee David Coldrick; McManus tapped over the free.

Lynch dropped over an inspirational Kildare point within ten seconds of the restart and Bolton belatedly picked up a black card (replaced by Eoin Doyle) for a foul on half-time substitute Gollogly. McGuinness and Mone added to Monaghan's wides tally either side of a Paddy Brophy wide for Kildare.

McGuinness finally delivered Monaghan's first point of the second half eight minutes after the restart (after Eamonn Callaghan had missed a Kildare goal chance) and McManus followed up with a converted free following a foul on Mone. Finlay reduced the deficit to a single point when arcing over a trademark free, won by McManus.

O'Neill missed a decent Kildare chance and the match exploded to life in the 50th minute when Vinny Corey collected a superb pass from his Clontibret O'Neill's clubmate McManus and planted a stunning left-footed shot past Mark Donnellan to the net from 25 metres - 1-11 to 2-6.

Within a minute, the Farney County carved open another goal chance: this time Finlay picked out Darren Hughes with a sublime pass but the Scotstown ace pulled his shot across the face of goal and inches wide of the far corner.

Within seconds of entering the fray, substitute Niall Kelly pointed with aplomb to reduce the gap to the minimum at the three-quarters stage and set up a grandstand finale. Without a championship win at HQ in over eight decades, Monaghan had the weight of history weighing on their shoulders and it showed as Mone added yet another wide to their growing tally.

The Lilywhites' shooting boots deserted them at a crucial time and they missed three attempts in as many minutes as Monaghan remained one point to the good with an hour played. At the other end, Fintan Kelly got forward from wing back to swing over a vital point: 1-12 to 2-7.

Brophy's 62nd-minute free from a difficult angle flew to the right and wide as Kildare strained to notch their third score of the second half, but the impressive Smith steadied himself before executing a beautiful point to make it a one-point match again with seven minutes of normal time remaining.

Finlay dropped a shot into Donnellan's grasp at the other end and Kildare captain Callaghan nailed the equalising score at the end of a patient team move with half an hour played in the second half: 2-9 to 1-12.

With Kieran Hughes operating around midfield and McManus labouring after taking a knock, Monaghan seemed to be posing little genuine scoring threat in the closing stages and it was a tense, tense finish as Eoghan O'Flaherty spurned a late free from the right off his right foot after a foul on Tomas O'Connor.

In the last minute of normal time, Corey dropped a shot short with history beckoning and, on the stroke of 70 minutes, O'Flaherty pointed the Lilywhites back in front after All Star defender Colin Walsh had failed to control the ball while raiding forward with intent.

McManus gathered a mis-hit Finlay shot and won a Monaghan free in injury time. The Clontibret clubman brushed himself down to tap over a routine 72nd-minute score, which meant that extra time would be needed to separate these teams.

Finlay missed a Monaghan free at the start of extra time but O'Flaherty made no mistake as he pointed from play to edge the Lilywhites ahead in the second added minute. At the other end, Kieran Hughes did the spadework and placed a pass to McGuinness, who split the posts with aplomb halfway through the first additional period.

With both sets of players out on their feet, Smith drove a shot to the left and then dropped one short. Last year's Ulster champions eased in front with a super point from substitute Jack McCarron - son of Ray - and daylight appeared between the sides when the predatory McGuinness poached a goal in the 79th minute.

McGuinness had a man on the overlap but backed himself after taking a pass from the influential Kieran Hughes and slid a low shot into the onion bag - 1-15 to 1-11. On the stroke of half time in extra time, Gollogly's shot went wide off the outside of an upright.

Hawk-eye confirmed that the umpires were correct in waving a Sean Hurley effort wide upon the resumption and McGuinness and Fogarty missed chances at either end before Beggan saved a pile-driver from Doyle at the expense of a '45'. Monaghan had understandably retreated to protect their four-point lead, which went down to three when Fogarty converted that '45' on 75 minutes.

McManus had an effort blocked down and substitute Padraig Donaghy also failed to find the range as the gap remained at three with the clock slowly ticking down. Full black Drew Wylie dispelled any notions of a blanket defence as he stormed forward to fire over the insurance point in the 79th minute and the outstanding Mone finally left the fray with a black card right at the death; Fogarty converted the subsequent free.

A minute of injury time was added on at the end of extra time and Smith's late, late shot blazed over the bar as Monaghan held on for a place in the last eight.