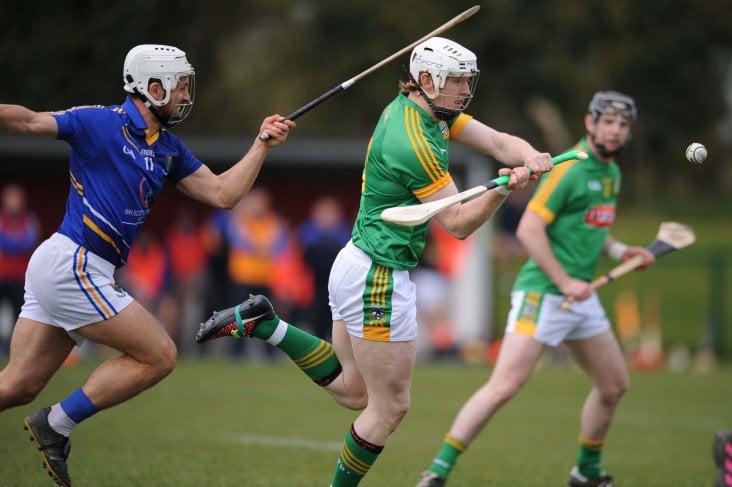 Meath's Damian Healy clears his lines as Stephen Kelly Wicklow closes in during the opening round of the Ring Cup at Trim.

The Ratoath man finished with 2-2 from play to his credit as Martin Ennis' charges eased into the quarter-finals having never been headed here.

Meath laid the foundations when playing against the breeze in the opening half. However, they were outscored by 0-5 to 1-6 in the final quarter.

Another significant contribution came from goalkeeper Shane McGann who made a number of fine saves that prevented Wicklow from causing an upset.

Martin Storey's men never looked like improving their recent record against Meath. However, they never gave up and but for seeing two goal attempts hit the frame of the goal might have finished closer to the hosts.

The 8/11 favourites made the early running despite playing into the breeze blowing from the town end. Adam Gannon opened the scoring from a free for a foul on Toher.

Points from Diarmuid Masterson (free) and Mikey Lee trimmed the deficit to a goal by the 13th minute.

When McGowan fired low to the net for his second goal the board read 2-8 to 0-2 after 30 minutes.

Wicklow pulled back four points in the run-in to the break with Padraig Doran netting their opening goal in first-half stoppage time.

Meath led by eight points at the interval, 2-8 to 1-3. Within five minutes of the restart Neil Heffernan added their third goal with Adam Gannon creating the opening.

The Killyon-man then created the opening for an excellent Toher point. By the 50th minute the margin was up to 12 points (3-11 to 1-5). The issue was settled but both sides will need improvement to make an impact in the competition.