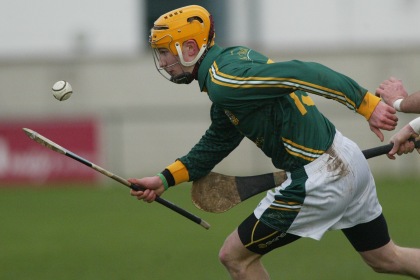 Adam Gannon's second half score of 1-3 was essential to Meath's success at the Armagh Athletic Grounds on Sunday afternoon.

The visitors bossed the first half and hit the front after two minutes when Michael Burke, who incidentally lined out with the county's footballers the previous evening in the NFL at Portlaoise, scored a point from distance.

A minute later Armagh keeper, Simon Doherty saved well from Derek Doran and the same player pointed in the sixth minute. James Toher landed a long range free and when Stephen Morris pointed in the tenth minute Meath were a comfortable four points clear but they still drove on and further points by Willie McGrath an Doran again had the visitors 6 up after a quarter of an hour. Matthew Lennon finally got Armagh off the mark with a free in the 18th minute but Paddy Conneely cancelled this out with another free in the 20th minute.

Fiachra Bradley and Matthew Lennon pointed from play for the hosts before Stephen Morris landed his second of the afternoon followed by further points from Doran and McGrath to leave the visitors comfortably ahead by 0-10 to 0-3 as the game entered the half hour mark. Paul Gaffeny pointed for Armagh but the reply from the Royal's was emphatic with points from Morris, Conneely (a free) and Damien Healy to leave Meath ahead by 0-13 to 0-4 at the interval but the lead should have been more as Healy was denied a goal by the ever alert home goalkeeper in the 33rd minute. In this first half centre back James Toher and wing back Sean Heavey cleared a lot of ball in this first half and Michael Burke and Stephen Morris controlled midfield in this half.

If Armagh struggled in the first half they certainly set about changing that in the second half as Conor Corvan pointed within 20 seconds and the same player was fouled in the 'area' for a semi-penalty which Matthew Lennon sent over for a point in the second minute of the half. Then in the 41st minute Lennon compensated for the penalty miss when he got on the end of a long delivery from midfield to goal from close range in the sixth minute. Meath finally got off the mark in the eight minute when Adam Gannon pointed.

Armagh got themselves back into the game in an action packed 46th minute when Lennon pointed a free and midfielder Paul Gaffney walked through the Meath defence to goal to leave just two points in it Meath 0-15 Armagh 2-7. Adam Gannon and Damien pointed almost immediately but by the 51st minute Lennon pointed a free to reduce the margin to a goal but in the 54th minute Adam Gannon goaled from close range and in the 57th minute Damien Healy and Conor Corvan exchanged points but Paddy Conneely, a free, Derek Doran aand Gannon added points but then in the 67th minute Conor Corvan sent an unstoppable shot to the Meath net but that was as good as it got for the hosts as the last score fell to Meath substitute Jack Regan in the 69th minute.

In that second half Shane Whitty had an outstanding game clearing lots of ball while halftime substitute Stephen Clynch gained a lot of possession early on, while Paddy Conneely and Michael Burke eventually got the visitors ticking over as the second half progressed but such a slow start to a second moiety would be exploited more ruthlessly by better teams that Meath will encounter in the future.