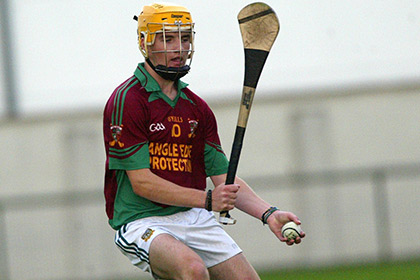 Kiltale kept there unbeaten run with a 6 pt victory over neighbours Kilmessan in this 4th round Meath Senior Hurling championship played in Ratoath.


Kilmessan started the brighter and raced into a 1g 3pts to 3pts lead after a mistake in the Kiltale defence after a terrific save by county keeper Shane Mc Gann led to a Kilmessan tap in to put a goal between the teams.


Kiltale responded with a great fetch by John Donoghue who offloaded to in running midfielder Cathal Mc Cabe who finished well to the Kilmessan net.


2007 captain John Donoghue was causing all sorts of problems at full forward and he notched up another two points and set up Jack Regan for a great point out on the left.

The Kiltale half back line of David and Stephen Donoghue and Padraig Kelly began to dominate and they restricted Kilmessan to 3pts from frees before the break.

Kiltale's Jack Regan converted 4 more placed balls before half time and further points from Peter Durnin 2pts and one from midfielder James Kelly resulted in Kiltale going in at half time 1g 10pts to Kilmessan 1g 6pts.

The second half Kiltale started brightly with two points from Jack Regan one a great effort out beside the dugout after great tackling by Eamon Ryan and Brendan Dixon to help force the Kilmessan defence into over carrying the ball.

Daren Reilly converted 4 placed balls in the second half and the remaining 2pts came from Stephen Clynch introduced as a sub at half time for Tony Horan.

Kiltale finished strong after losing Philly Garvey to a second yellow card after 15mins and played the remainder of the game with 14 men but young guns Eamon Ryan 2pts,Cathal Mc Cabe 1pt but 4pts between the teams.

The introduction of Cillian O' Sullivan home from Australia had a major impact and at full forward he hit over two outstanding points one out on the right and the second out on the left and he will look forward to playing with his brother Mark due home from America this week along with Anthony Forde.

Young Kevin Ryan gave Kiltale that extra pace when introduced in the final quarter to help make up for the loss of Philly Garvey.

Kiltale had great performances from the Donoghue brothers in defence Padraig, David and Stephen and they were well assisted by Anthony Donnelly, Padraig Kelly and Chris Reilly.

At midfield Cathal McCabe and James Kelly made sure the forwards got a good supply of ball.

In the forwards Brendan Dixon and John Donoghue made things happen for all the young players around them and Donoghue was unlucky to see his shot trickle wide after a great fetch on the edge of the square and with Kilmessan keeper Mark Brennan beaten.

Young players Jack Regan and Eamon and Kevin Ryan and Cillian O' Sullivan brought great pace and energy to the Kiltale forward line and they helped make up for the fact that Kiltale had only 14 men for the last 20mins.