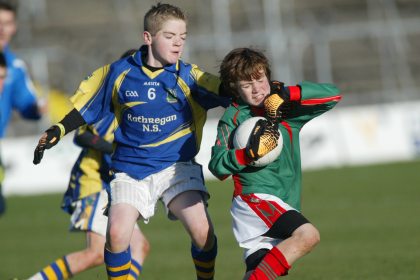 As per usual the Meath Cumann Na mBunscol finals served up plenty of excitement at Pairc Tailteann. The large crowds in attendance were treated to a great day of football. In total there were six titles up for grabs.

Scores were hard to come by in the first game of the day which started at 9.30. Dangan were supieror throughout. A goal and a point from midfielder Sophia Payne had the eventual winners four points up at the break. Baconstown enjoyed a period of dominance early in the sewcond half and were rewarded with points from Erin Leddy and Roisin Malone. Dangan replied with 1-2 from their captain Eliece Elliott to set her side up for a comfortable win.

This was Drumbaragh's first ever appearance in a schools final and what a day it turned out for the school and theirlarge number of supporters. Goals from Harry O'Higgins and Jack Jordan had the winners 2-1 to 0-3 up after 15 minutes. Rathregan battled back and only two points separated the teams at the interval 2-2 to 0-6. Drumbaragh captain Michael McNamee was superb in the opening ten minutes of the second half. The midfielder added 1-3 to his schools tally without reply. Another goal from Jack Jordan had Drumbaragh ahead 4-5 to 0-9 with ten minutes left. Eoin Kealy and Adam McHugh netted for Rathregan to set up a tense last few minutes but Drumbaragh held on to record a historic win.

St Seachnalls were always in control in the third final of the day. The winners led 1-2 to 1-0 at the break. Katelyn Doherty kicked two points while Ciara Gorman got their first goal. Hannah Donnelly kept St Olivers in the game with a well worked goal. St Seachnalls dominated the second half. Doherty added 1-2 to her tally and a second goal from Gorman gave the Dunshaughlin school their first Division 1 title since 2006.