GAA cousins line out together for Leinster rugby team 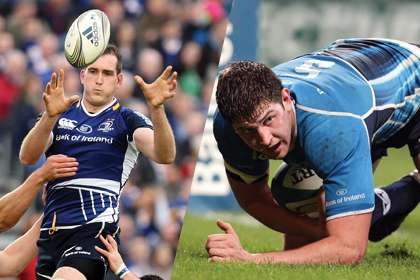 Devin Toner and Mark Flanagan
Irish rugby international Devin Toner was joined in the Leinster team for the first time by his cousin Mark Flanagan in last Saturday's RaboDirect Pro12 Cup victory over the Cardiff Blues.

Both players come from GAA backgrounds with 6'10" Toner having played underage football with Moynalvey in Meath and 6'7" Flanagan a former St. Loman's and Westmeath underage star. It was a proud occasion for 22-year-old Flanagan who was making his first competitive senior start for the province.

Speaking to Westmeath Topic this week, Flanagan's father Joe said: "One of the best parts of it all was that he lined out alongside his cousin Devin Toner. Devin, who is from Summerhill, is my sister Anne's son and it was fantastic to see them line out together - it has always been an ambition of mine."

He continued: "Mark was late starting rugby - I think he was 16 before he actually played. He was playing Gaelic with St. Loman's for years and had been called up to the Westmeath minor team. Then, one day, one of his friends rang him and asked him to come to the Mullingar rugby game that evening as they were short a player and he went down and absolutely loved it. He hasn't looked back since!" Tweet