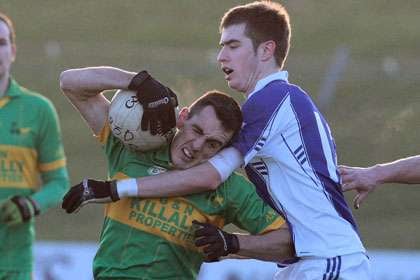 The Leinster Club SFC semi-final at Pairc Tailteann proved to be a bridge too far for Skryne who, despite a brave comeback in the second half, fell short against favourites Rhode from Offaly.

The Meath champions were very much second best in the opening half hour and were fortunate to be only five points (0-5 to 1-7) behind at the break. They only led briefly after Ian Davis' second pointed free on nine minutes.

Offaly county forward Niall McNamee was expected to prove a hot handful for the Skryne defence and so it proved. In the first half most of the balls towards the posts at the hospital end were directed towards the brilliant corner-forward whose goal after 13 minutes gave Rhode a 1-2 to 0-2 advantage.

McManus was marked by Mark Jordan in then first half but sneaked in behind the cover to fire past Felim O'Rourke give the Faithful County representatives a lead which they held from then to the end.

Points from Anton Sullivan, Niall Darby, corner-back David Hope and McNamee (two) had Rhode firmly in control although Kevin Mulvaney looked threatening when getting opportunities in the Skryne attack.

Before McNamee took his second point after a string of passes, a second goal appeared to be on the cards and although Mark Battersby reduced the deficit with the last score of the first period, so outplayed had Skryne been that it was difficult to give them a chance of making a match of it.

Even more so when Felim O'Rourke fumbled an attempt to clear his lines about a minute after the restart and Darby punished the error to leave the margin six points.

Up to then new Meath manager Seamus McEnaney, who was in attendance, could not have been impressed by any player in blue and white. But then the Meath champions, who had fired two wides immediately after the restart, began to find some of the spirit which gained them country honours.

Skryne also found their scoring touch. Davis held his nerve to slot over three frees, two of them earned by Trevor Giles, and midfielder Aidan Tuite got on target from the right flank.

That burst left the board reading 1-8 to 0-9 and although Rhode responded with three points from the brothers Niall (free and play) and Alan McNamee, there was another rally left in Skryne.

Just when Rhode, who had lost out in the Leinster finals of 2006 and 2008, looked to be strolling through to another provincial decider, Skryne rattled them with a point and a goal to leave the margin the minimum.

Paddy O'Rourke, who did not have one of his better days, fired a 45 from well out on the left between the uprights and after Davis mishit a free on 53 minutes, Mulvaney finished to the net from close range.

Just when extra-time looked on the cards as the evening became bitterly cold, Rhode manufactured their second goal. Ciaran Lenehan had been doing well on Niall McNamee in the second half but the Offaly attack was not flying on one wing.

With a couple of minutes left, Rhode raided down the right and cross from Sullivan was finished past Felim O'Rourke with the hand by veteran Roy Malone, who was unable to start due to an injury but came on in the closing stages.

Skryne could have few complaints about the result as they were the second best side on the day. Ballinabrackey manager Pascal Kellaghan, who was listed at full-forward but fulfilled a deeper role, played no small part in Rhode's victory.