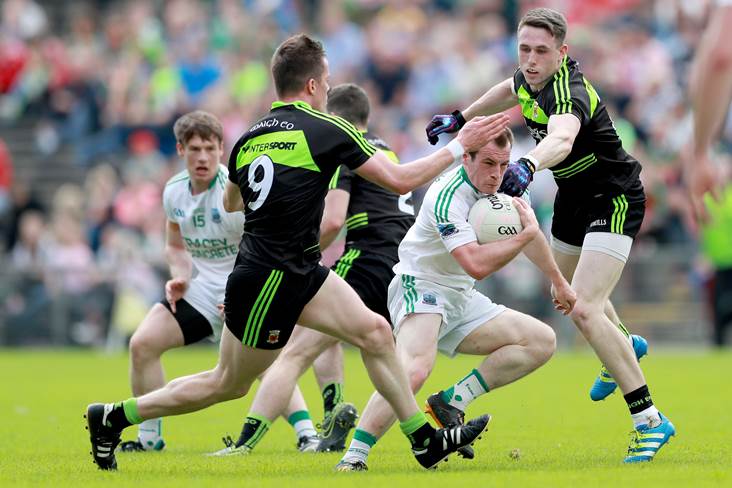 Aidan O'Shea's theatrics helped Mayo beat Fermanagh by 2-14 to 1-12 in a game of two halves at Castlebar.

The winners outscored their opponents by 1-10 to 0-2 in the second half but the defining moment arrived in the 65th minute when Cillian O'Connor clinically despatched a penalty wrongly awarded by referee Joe McQuillan after O'Shea threw himself embarrassingly to ground under the merest of contact.

Fermanagh led by a point prior to that goal, 1-12 to 1-11, and were out on their feet, playing into the wind. Mayo were almost certainly going to win anyhow, but the manner of their decisive goal was most disappointing.

With 12,011 looking on, the winners knocked over five successive points to draw level at 1-11 apiece by the 60th minute but Tomas Corrigan drilled over the visitors' second point of the second half to restore their lead two minutes later.

Mayo were awarded the penalty when O'Shea flung himself Steven Gerrard style to the deck after minimal contact from full back Che Cullen and Man of the Match O'Connor rifled the ball to the top left corner to give his side a two-point cushion with five minutes to go.

Points from Lee Keegan and O'Shea in the 69th minute stretched the gap to four and goalkeeper David Clarke made a decent stop to deny Fermanagh a last-minute goal before substitute Alan Dillon closed the scoring in added time.

With the wind behind them, the underdogs produced a tremendous first-half display to lead by six points at the short whistle, 1-10 to 1-4.

When Sean Quigley brushed off Kevin Keane in the 16th minute and rounded Clarke to roll a left-footed shot to the empty net, with that score bookended by two delightful Corrigan points, the northern raiders led by four points, 1-6 to 1-2.

A soft free presented Cillian O'Connor with his second point of the afternoon and the two-times Young Footballer of the Year followed up with another, but three Fermanagh points in as many minutes from Quigley, Breen and Eoin Donnelly edged Pete McGrath's men five ahead before Ryan Jones arrowed over a splendid left-footed strike to close the first-half scoring.

The Ernemen had slotted four of the first five points, with wing back Breen, Barry Mulrone, Quigley (free) and Corrigan (free) all on target to a Diarmuid O'Connor response, but Alan Freeman bundled the rebound to the net after Chris Snow had denied Keith Higgins and Cillian O'Connor's opening score had the hosts ahead momentarily after 14 minutes.

A diving Snow save denied Cillian O'Connor after the Mayo corner forward had opened the second-half scoring from a free and Mulrone's second - via the fingertips of Clarke - cancelled out a Diarmuid O'Connor effort. A beautiful Evan Regan free from the hands meant the gap was four with ten minutes played in the second half; Dillon fired another over five minutes later as the Connacht champions of the past five years crept incrementally closer.

The hosts sprung Barry Moran from the bench for the fourth quarter and Regan blazed a goal chance wide before Keegan, Colm Boyle and Cillian O'Connor ('45') levelled the scores for the third time. Fermanagh edged back in front but Stephen Rochford's men reeled off 1-3 at the end to progress to Monday morning's third-round draw.

Fermanagh gave it everything and could at least walk off the pitch with their heads held high.