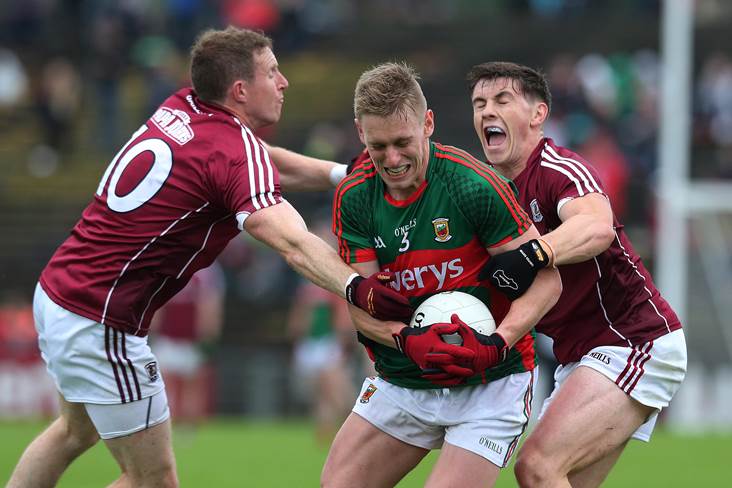 Gallant Galway are through to the Connacht final after a sensational 1-12 to 0-12 victory over holders Mayo at Castlebar.

With Roscommon awaiting the winners in this year's provincial decider next month, the hosts were bidding for a sixth successive Nestor Cup, but Kevin Walsh's 4/1 outsiders reigned supreme tonight, with midfielder Thomas Flynn netting the decisive goal in the 55th minute.

That major was part of a magnificent run of 1-5 without reply from the underdogs between the 54th and 67th minutes. They had managed just a single point in the first 17 minutes of the second half and trailed by 0-11 to 0-7 but rolled up their sleeves to stun the defending champions with a devastating grandstand finish.

Having failed to score from play during an abject first half-hour, Mayo - who didn't register once from play in the second half! - briefly shook off their lethargy to at least finish the first half strongly, landing six points against one from the 30th minute onwards to lead by 0-8 to 0-6 at the interval.

The visitors had led by 0-5 to 0-2 prior to that but faded as Stephen Rochford's men came into the game, spurred on by Seamus O'Shea, who had replaced the injured Jason Gibbons in the 18th minute.

Cillian O'Connor opened the scoring from a '45' in the fourth minute but the Tribesmen replied with scores from impressive debutant Eamonn Brannigan and Gary Sice (2) to lead by 0-3 to 0-1 after 23 forgettable minutes. O'Connor's free halved the deficit but Shane Walsh hit back with a point on 28 minutes.

Johnny Heaney hammered over a fifth Galway point via the fingertips of Robbie Hennelly five minutes from the break before centre back Colm Boyle supplied the holders' first score from play an unbelievable 31 minutes after throw-in!

Tom Parsons notched Mayo's fourth point two minutes from the break and Aidan O'Shea hit their tenth wide before a tremendous O'Connor free from distance tied the scores up for the second time on the stroke of half time. Lee Keegan raided forward for a trademark point in injury time and Stephen Coen - a late addition to the starting XV - added another … five-in-a-row from the hosts!

Brannigan hit back but Jason Doherty had the final say of the first period as the losers finished the half strongly. That five-minute flurry before the break had saved Mayo's blushes temporarily - prior to that, they were very poor indeed. They were subsequently outfought and outhought in the second half by a determined Galway combination sporting five championship debutants.

O'Connor's free opened the second-half scoring and St Michaels clubman Brannigan notched his third point before the hosts moved four clear thanks to two further converted frees from Evan Regan and O'Connor, 0-11 to 0-7.

Sice's converted free was only Galway's second score of the second half but midfielder Flynn burst forward to tie the scores up with a brilliant solo goal, gathering possession from Hennelly's weak restart before planting his shot in the net 15 minutes from time.

Astonishingly, Flynn's midfield partner Paul Conroy pointed the Tribe ahead instantly and Danny Cummins doubled the gap with 13 minutes left, 1-10 to 0-11! Another converted Sice free meant that Galway had registered 1-4 without reply in the 16 minutes leading up to the hour mark to transform an 11-7 deficit into a 1-11 to 0-11 lead!

Conroy supplied the insurance point in the 32nd minute of the second half and Mayo mustered a last-gasp O'Connor free - their final score of this year's Connacht SFC. Four pointed frees in the second half is an embarrassing return from Mayo tonight as they turn their attention to the second round of the Qualifiers.

Galway, on the other hand, have silenced a lot of doubters.