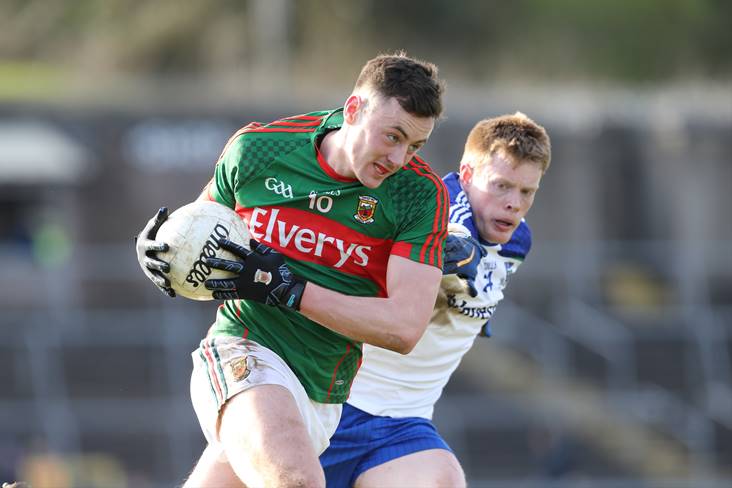 Diarmuid O'Connor of Mayo and Ryan McAnespie of Monaghan
©INPHO

Goalkeeper Rob Hennelly was the unlikely scoring hero as Mayo finally put two points on the board in Division 1 thanks to a thrilling victory over Monaghan in Clones.

The large travelling Mayo support must have feared a fourth straight defeat was in the offing when they surrendered a five-point lead in the second half, but they steadied themselves and two late frees from Hennelly saw them over the line.

The hosts could have had a goal straight from the throw-in when Karl O'Connell broke through the Mayo defence, only to be denied by Hennelly. The three O'Shea brothers started for Mayo, but they were reduced to two when Aidan was controversially black-carded for an incident involving Ryan Wylie after just seven minutes, with Jason Doherty coming on as his replacement.

Before that early flashpoint, Conor O'Shea and Fintan Kelly had traded points. Conor McManus and Evan Regan did likewise from frees before Monaghan were awarded a penalty in the 11th minute when Kelly was flattened by two Mayo defenders. McManus' shoot was blocked by Hennelly, but he tapped home the rebound to leave Monaghan 1-2 to 0-2 ahead.

But within two minutes, the sides were level again thanks to a cracking goal by Mayo's Conor Loftus. Monaghan responded with points from Dermot Malone, Thomas Kerr and Shane Carey, but the Connacht champions had three-in-a-row from Diarmuid O'Connor, Conor O'Shea and Evan Regan to hold a slender 1-6 to 1-5 lead at the break.

Stephen Rochford's men extended their advantage to five points early in the second half thanks to a Jason Doherty point and a goal from Diarmuid O'Connor in the 41st minute. Conor McManus, who accounted for all but one of Monaghan's seven second half points, replied with a brace of frees, only for Kevin McLoughlin to hit back with two from play.

The visitors had Lee Keegan black-carded with 20 minutes to go after he pulled down McManus and their lead was gradually reduced before McManus' sixth free of the half levelled proceedings at 1-12 to 2-9 with five minutes of normal time remaining.

But a monster free from Hennelly two minutes later restored Mayo's lead before the goalkeeper slotted over another free in injury-time to seal the win.