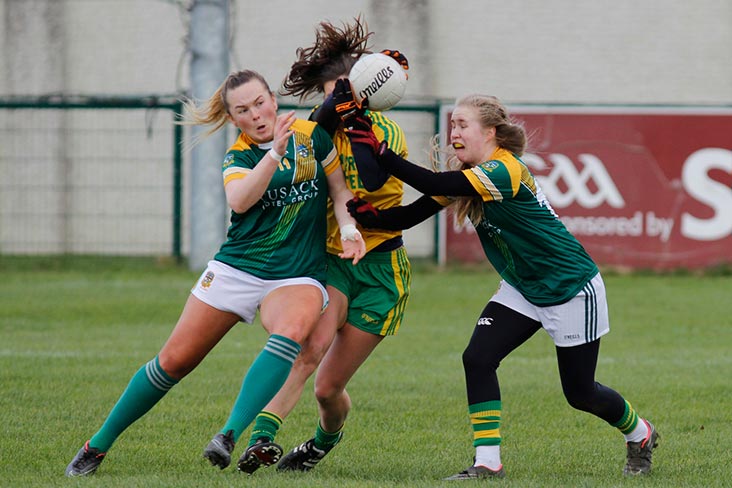 Tough going between Meath and Donegal in the NFL Division 2 game at Lomans Park Trim.

With Staunton on top form, Mayo led by 3-9 to 0-7 at half-time against the visitors.

The sides were level at 0-1 apiece in the early exchanges before Staunton struck for Mayo's opening goal.

With 13 minutes played, Staunton netted again to hand Mayo a 2-4 to 0-1 lead and Sarah Rowe added a third goal to effectively put the tie to bed.

Armagh opened the second half with a goal from Caroline O'Hanlon but Mayo added another before the finish, with Aileen Gilroy on target.

Mayo preserved their 100 per cent record with this victory and already, a place in the top four looks all but secured.

Elsewhere, Dublin maintained their good start to the season by collecting a third victory from four outings.

The Sky Blues gained some measure of revenge for last year's All-Ireland final defeat to Cork by scoring a 3-10 to 1-13 victory over the Rebelettes at Parnell Park.

The opening score of the game was a Cork goal, scored by Orla Finn, and the Leesiders led by 1-7 to 1-3 at the break.

Lyndsey Davey scored a brilliant Dublin goal to keep the hosts in touch and they kickstarted their revival with a goal early in the second half from Amy Ring.

Carla Rowe scored a third Dublin goal to hand Greg McGonigle's side a 3-7 to 1-10 lead and they would hold out until the finish to collect maximum points.

Rowe finished with 1-4 for Dublin while Finn ended as Cork's leading scorer with a haul of 1-6, including five pointed frees.

Monaghan collected their first victory of the campaign as Ulster rivals Tyrone were sent packing on a 1-15 to 0-4 scoreline in Drumhowan.

Therese McNally's first half goal helped Monaghan to lead by 1-9 to 0-3 at the break, on a day when Ellen McCarron and Cora Courtney scored five points each for the Farney girls.

Tyrone managed just a single point from play during the entire game, scored by Maria Canavan, and remain firmly anchored to the bottom of the table, without a point from four outings.

Roisin Leonard netted a 20th minute penalty for Galway but Kerry had the lead at half-time as Bernie Breen netted seven minutes before the break.

Kerry were 1-7 to 1-5 ahead at the halfway point but Galway struck the first big blow of the second half when Mairead Seoighe netted.

Sarah Houlihan's goal in the 46th minute had Kerry 2-12 to 2-6 clear, however, and they held on to move into the playoff picture.

In Division 2, there were victories for Donegal, Westmeath, Clare and Kildare, as Waterford, Wexford, Roscommon and Tipperary claimed victories from their Division 3 outings over the weekend.

And in Division 4, Derry, Longford and Limerick claimed wins over Carlow, Wicklow and Antrim respectively.