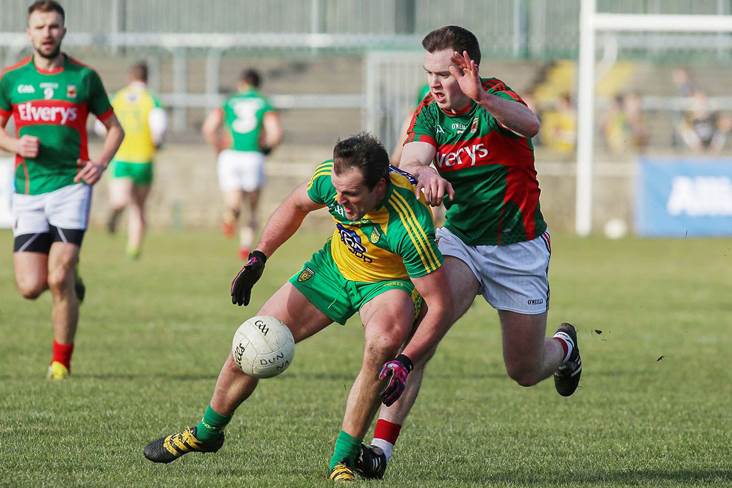 The result leaves the winners level with Dublin at the top of the table with three wins from three, while Mayo remain pointless at the foot of the Division One table.

With 11,000 spectators looking on, this heavyweight tussle ebbed and flowed until Leo McLoone's goal 13 minutes from the end finally gave the hosts a glimpse of the winning post.

At the end of a first half played at championship intensity, the Connacht champions led by the odd point from 15. Brendan Harrison banged over the lead point on the stroke of the short whistle, after Murphy's '45' seemed to have assured the hosts of parity at the interval.

Evan Regan settled the visitors with a couple of converted frees inside the opening five minutes but Donegal were level by the 20th minute, 0-4 each, thanks to scores from Odhran MacNiallais, Murphy (2) and Rory Kavanagh.

Robbie Hennelly and McBrearty traded frees and Lee Keegan swapped points with Ryan McHugh before a Regan free edged Stephen Rochford's men ahead on 32 minutes. That exchange between Murphy and Harrison meant Mayo led by 0-8 to 0-7 at the break.

McHugh tied the scores up again within 30 seconds of the restart. Regan restored Mayo's advantage before the hosts moved ahead for the first time through McBrearty and MacNiallais. Stung into action, Mayo replied with a Diarmuid O'Connor major from a penalty in the 45th minute followed quickly by a Connor Loftus point - 1-10 to 0-10.

As the temperature rose, Murphy and McBrearty pulled back a couple of frees and McLoone netted on 57 minutes to give Rory Gallagher's men a 1-12 to 1-10 advantage. After goalkeeper Hennelly halved the deficit from a free, twin terrors Murphy and McBrearty left the home team in a commanding position with time running out.

Seamus O'Shea's 68th-minute point reduced the arrears to two but Donegal held on for a hard-fought victory.