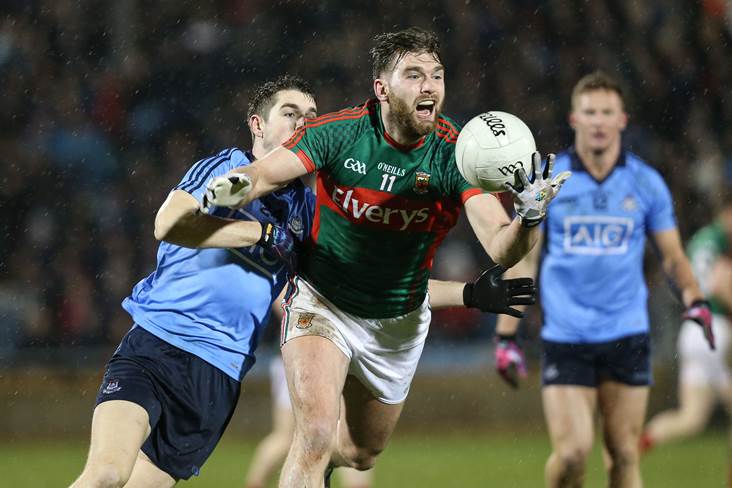 Dublin defeated Mayo by 0-9 to 0-7 in a tense encounter staged in desperate conditions at McHale Park.

A crowd of 10,520 braved the rain, wind and cold to witness the latest instalment of this bitter rivalry, which the holders effectively won with a run of three unanswered points between the 45th and 47th minutes from Dean Rock (two frees) and outstanding Man of the Match James McCarthy.

Those points made it 0-7 to 0-4 and, despite the backing of the elements, the hosts were unable to get back into contention.

At the end of a low-scoring first half, where conditions made life difficult for both sets of forwards, Dublin led by the odd point from seven. Rock clipped over the lead point from a '45' deep into added time after the Connacht champions - playing against the cold wind - had more than matched their opponents.

Philly McMahon was a late addition to the Dublin starting XV (for Cian O'Sullivan) but still only got a cameo as he was black-carded for a foot-trip inside two minutes; his replacement was Footballer of the Year Jack McCaffrey! Mayo pointed first with a fisted Diarmuid O'Connor effort, while three different Dubs attackers missed frees inside the first six minutes - Rock, Diarmuid Connolly and Paul Mannion.

Rock's simple ninth-minute free opened the visitors'' account and the next score didn't arrive until the 20th minute - a brilliant strike from Connolly. Evan Regan and goalkeeper Robbie Hennelly ('45') edged the hosts back in front but veteran midfielder Denis Bastick raided forward to equalise before Rock closed the first-half scoring.

Diarmuid O'Connor shrugged off an injury to hammer over the leveller seven minutes after the restart but Rock restored the one-point gap with a terrific free into the wind before the free-running McCarthy followed up instantly and Rock added another free.

Mayo mustered a point from a Regan free but there were no more scores until substitute Cormac Costello popped over Dublin's eighth point five minutes from time. After Hennelly bagged his second '45', Emmett O Conghaile stretched the gap to three again before Regan converted a Mayo free on the stroke of full time.

As tempers became frayed in injury time, both teams were reduced to 14 men as Colm Boyle and John Small each picked up their second yellow cards. But there was no further as Dublin left the west with another win.