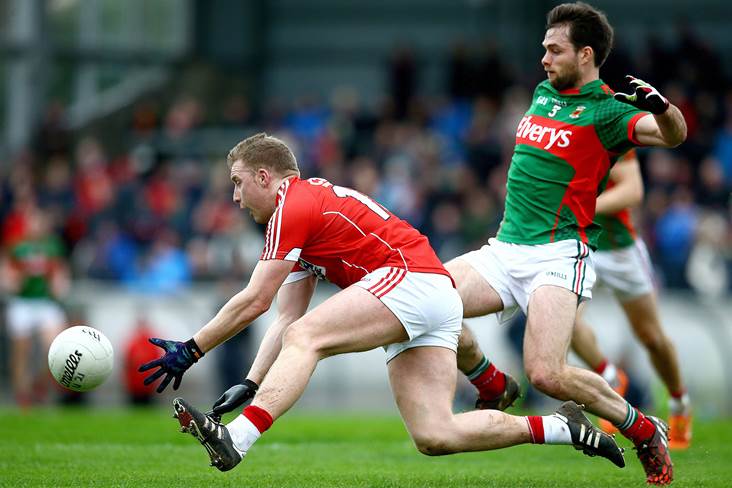 Cork made an impressive start to their Allianz League Division 1 campaign by easing to victory over Mayo at Pairc Ui Rinn.

Peadar Healy's first league game in charge of the Rebels couldn't have gone much better as they bossed proceedings from start to finish. By contrast, it was a chastening experience for new Mayo manager Stephen Rochford whose side would have been beaten by more but for the excellent goalkeeping of Rob Hennelly, who saved a second half penalty from Daniel Goulding and also denied Brian Hurley and Mark Collins.

Playing an attractive brand of football on a lovely sod, the hosts opened up an early two-point lead before a Jason Doherty brace brought Mayo level. But the Rebels never looked back after Brian Hurley edged them back in front in the 16th minute. Hurley tagged on a free before a booming effort from wing back Tomas Clancy eased them into a 0-5 to 0-2 lead after 20 minutes.

Mayo reacted by introducing Aidan O'Shea in place of Kevin McLoughlin before Goulding made it an eight-point game. Lee Keegan got one back for Mayo, but back came Cork again through Brian O'Driscoll to restore their eight-point advantage, 0-12 to 0-4, at the break.

Cork continued their dominance by resuming with points from Ian Maguire and Hurley before Goulding had a penalty saved by Rob Hennelly after Kerrigan had been fouled by the Mayo 'keeper in the 44th minute.

Mayo then enjoyed their best spell which yielded three unanswered points, but Cork kicked on again with scores from Kerrigan, Connolly and Brian O'Driscoll before they were awarded another penalty. This time Brian Hurley made no mistake to fire them into a 1-18 to 0-7 lead.

The Connacht champions, to their credit, rallied in the closing stages, but not even the late dismissal of substitute Andrew O'Sullivan (second yellow) could take away from what was a superb performance by the hosts.

One of the big talking points was a heavy collision between Eoin Cadogan and Lee Keegan, which resulted in both players having to be substituted in the second half.