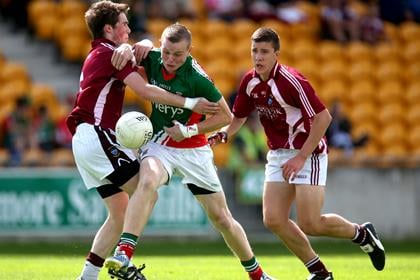 The August Bank Holiday weekend got even better for Mayo when they comfortably disposed of Westmeath's challenge at a sunny O'Connor Park in Tullamore.

The Connacht champions led from start to finish and will now face the winners of the Monaghan v Tipperary quarter-final for a place in the Tom Markham Cup decider. Westmeath were well in the game at half-time when they trailed by just three points, 0-6 to 0-9, with wind advantage to come in the second half.

But goals from Cian Hanley (penalty) and Darragh Doherty in the 38th and 40th minutes put the Westerners on the road to a comfortable victory as Westmeath finished the game with 14 players after substitute Alan Hughes was red-carded for an off-the-ball incident involving Ronan Finn.

While all of Mayo's starting forwards got on the scoresheet, a poor Westmeath side's only scores came from full forwards Luke Loughlin and Rob Hickey.

Favoured by the wind in the first half, Mayo raced into an early 0-3 to 0-0 lead thanks to points from all three members of their half forward line, Conor Loftus, Cian Hanley and Michael Plunkett in that order.

Rob Hickey opened Westmeath's account before Mayo reeled off three more unanswered points to ease into a 0-6 to 0-1 lead by the end of the first quarter. Another Plunkett effort from play was followed by frees from Liam Irwin and midfielder Val Roughneen.

Westmeath badly needed some inspiration and it was provided by their star forward Luke Loughlin who shot two points in quick succession - the second a brilliant individual score. Loftus replied with a great point on the counterattack before Irwin's second free made it 0-8 to 0-3.

Hickey (free) and Tommy Conroy traded points before Hickey got his second from play after his initial attempt from a free had dropped short, but had been worked back to him by Loughlin. And Westmeath's strong finish to the half continued when Loughlin put over his third from play.

But Mayo quickly put the game to bed after the restart. Tommy Conroy had a 35th minute point before Cian Hanley was taken down for a penalty by Andrew McCormack three minutes later. The Ballaghaderreen clubman - who is a younger brother of Aussie Rules star Pearse - dusted himself down to plant the ball in the top right hand corner of Joe Hyland's net to make it 1-10 to 0-6.

Irwin added a point from a free before Hanley sent into a high ball from the right sideline which Darragh Doherty flicked to the net. When Doherty and Hanley followed up with points, Mayo were 2-13 to 0-6 in front and out of sight.

Tommy Carr's Westmeath had to wait until the 48th minute for their first score of the second period from a Loughlin free. The Downs man slotted his fifth point before Hughes' 54th minute dismissal completed the Lake County's misery.