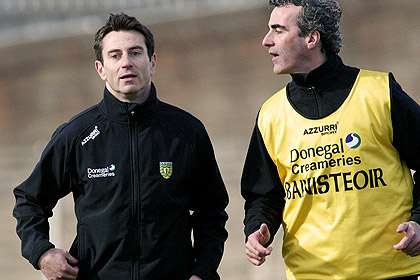 It follows sensational claims made by Donegal assistant manager Rory Gallagher that Mayo offered advice to Monaghan on how to beat the All-Ireland champions when the counties met in a challenge match before the Ulster final. And this has led Gallagher to believe that the heavy challenge by Monaghan's Stephen Gollogly that forced Mark McHugh's early withdrawal, and which left the Kilcar man with concussion, a burst ear drum and a quad muscle injury, was pre-meditated.

"Maybe we suspect there was a bit of collusion between Monaghan and Mayo," Gallagher said in the Irish News.

"Bear in mind Lee Keegan's tackle on Mark McHugh at the start of last year's All-Ireland final. When Lee Keegan got booked, he came out and winked at a team-mate as if to say 'job done'.

"I don't believe for one minute that Gollogly went out to do the harm he did. He went out to hit him hard, but our player came out of it badly. I know Gollogly hurt himself as well.

"I don't believe Malachy O'Rourke sent any player out to 'do' anyone. That is not in his nature. But ask some of the top referees to view the incident. Was it a dangerous tackle? It was reckless and dangerous. At the end of the day, that deserves a red card."

The former Fermanagh star also claimed that well-known sports psychologist and journalist Kieran Shannon is advising Mayo manager James Horan on what to say to the media.

"I think Horan works to a pre-mediated script and I think Kieran Shannon is behind a good bit of it," Gallagher continued.

"I know Shannon fairly well. He was involved with Fermanagh when Malachy O'Rourke was there. I think Shannon is behind Horan's statements." Tweet