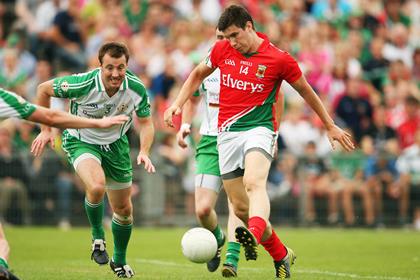 There was no fairytale ending for London in today's Connacht SFC final as Mayo sauntered to a third provincial success in a row at Castlebar.

An attendance of 21,274 turned up to witness the Exiles' first ever appearance in a provincial decider but, as expected, the gulf in class between the two teams was very much in evidence from early on.

James Horan has been credited with instilling a ruthless streak in his Mayo team and they showed no mercy to the visitors as the game drifted to its inevitable conclusion.

The home side were in control of proceedings at the halfway stage when leading by 2-6 to 0-5.

'Young Footballer of the Year' Cillian O'Connor was introduced as a replacement for Darren Coen during the half-time interval and he marked his return from a shoulder injury with three second half goals.

O'Connor also sent over three points for good measure and his well-being is a major plus for Mayo as they look ahead to the All-Ireland series.

But, in general, It wasn't an overly impressive display from the 1/500 favorites and their sideline team won't be happy with the 16 wides they kicked.

London also exposed some frailties in their defence but lacked the composure to finish off their goal chances.

Taoiseach Enda Kenny was introduced to both teams before throw-in and Kevin McLoughlin opened the scoring from a placed ball following a foul on Andy Moran in the 2nd minute.

Lorcan Mulvey restored parity from a free in the 7th minute before Richie Feeney edged the home side back in front.

Darren Coen hit Mayo's second goal in the 23rd minute and the team in red and green held a 2-6 to 0-2 lead after 23 minutes.

The remainder of the first half belonged to Paul Coggins' charges, however, as they held their more illustrious opponents scoreless while raising three white flags at the other end of the field.

The hard-working Mulvey fired over three points from frees as London gave a respectable look to the scoreboard at the half-time.

Former Cavan player Mulvey drew first blood for London in the second half from a free shortly after the resumption following a foul on Cathal McCallion but points from Lee Keegan and Andy Moran reaffirmed the Mayo's superiority.

Colin Daly missed a glorious goal scoring opportunity for London in the 41st minute and O'Connor showed him how it is done at the opposite end of the field when finishing off a pass from Aidan O'Shea with his first touch of the contest.

O'Connor bagged his second goal in the 48th minute and he completed his hat-trick via the penalty spot 14 minutes from the end following a foul on Tom Cunniffe.

Padraig McGoldrick and Mulvey rounded off the scoring for London but the day belonged to Mayo and, afterwards, captain Andy Moran raised the Nestor Cup much to the delight of the home support.

London's attentions turn to a round 4 qualifier clash against Cavan.