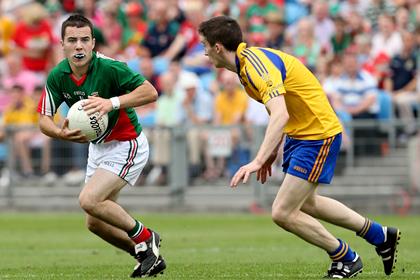 The crossbar was the difference as Mayo ended Roscommon's three-in-a-row bid in an exciting Connacht MFC final at Elvery's MacHale Park.

Having trailed by nine points early in the second half, the holders had reduced the deficit to just three points deep into injury-time when Ultan Harney's long, hopeful ball came back off the Mayo crossbar and the final whistle sounded seconds later.

Ultimately, Roscommon were undone by the concession of two early goals and another just after half-time which propelled Mayo into a seemingly unassailable lead. But the Rossies refused to lie down with Diarmuid Murtagh's late penalty setting up a grandstand finish.

The home side got off to a blistering start with two goals inside the first eight minutes. Darragh Doherty got the first before full forward Liam Irwin rattled the net for a second time after selling two dummies.

Following that let-off for the red and greens, the game settled down. Diarmuid Murtagh (free) and Mayo centre back Stephen Coen traded points coming up to the quarter-hour mark. Roscommon got the next three points from Murtagh and McGann (two) to leave just a goal in it, 0-5 to 2-2, but an Irwin free steadied Mayo and corner forward Tommy Conroy added another point to leave them five clear, 2-4 to 0-5, at the break.

Within two minutes of the restart, Mayo had opened up a nine-point lead, 3-5 to 0-5, thanks to a quick 1-1. Stephen Burke pointed straight from the throw-in before Conor Loftus fisted home their third major after Irwin's initial effort had been saved.

Roscommon rallied with three points in-a-row from Murtagh (two) and McGann before Irwin replied for Mayo. Substitute Senan Farrell scored with his first touch and further scores from Cathal Compton and captain Ronan Daly left five in it, 0-10 to 3-6.

Then, with four minutes remaining, Harney was brought down for a penalty and Murtagh confidently dispatched the ball to the back of the net. Irwin replied with a crucial free for Mayo who were lucky to hold on for the win in the end.

Mayo will now face beaten Leinster finalists Westmeath in the All-Ireland quarter-final, while Roscommon will get another chance against Leinster champions Kildare. Both games will be played on the August Bank Holiday weekend.