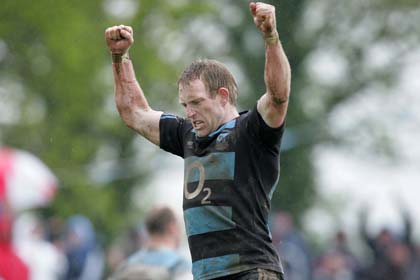 Stephen Kelly in action for Shannon
Stephen Kelly will continue to combine his football and rugby commitments throughout the spring, Limerick manager Mickey Ned O'Sullivan has confirmed. The Newcastlewest speedster operated a dual mandate last spring when he lined out for both the Limerick footballers and the Shannon rugby team, and O'Sullivan is happy for him to continue juggling both codes this year. "Stephen will continue to play for both Limerick and Shannon this season. It worked very well for us last season when I liased regularly with Mick Galwey in Shannon," he told the Irish Examiner. "There's new management in place this year in Shannon, but I'll be talking to them regularly as well. Most of his games are on Saturday with the rugby and we will work it as it goes along. I'm sure that it will continue and Stephen is a big player in our squad." O'Sullivan has recruited the services of dual player James Ryan, who was one of the players to depart the county hurling squad before Christmas, but Stephen Lucey and Thomas Cahill won't be available for the start of the National League because of injury. "James will be a big help to us. He had indicated before the hurling issue arose that he was going to commit to the football set-up. It's great news that he is available as he has been involved with the footballers only for the previous three years." Tweet