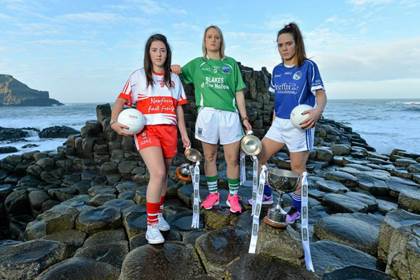 TESCO and the Ladies Gaelic Football Association joined forces today to launch the 2015 season of the National Football Leagues at iconic venues throughout the country.

February 1st will mark the first round of the TESCO National Football Leagues and they will continue at local stadia in every part of the country right throughout the Spring and into May when the finals will be held at Dublin's Parnell Park.

Supporters of Ladies Gaelic Football have been urged to get behind their county and support their Ladies Football team, especially at their home matches. The 2015 TESCO NFL was launched regionally at four iconic locations throughout the country including the Giant's Causeway, the Phoenix Park, Ross Castle in Killarney and Salthill in Galway to demonstrate that you are never far from some top class action anywhere in the country.

Success in the TESCO National Football Leagues has proven to be a great guide as to what will happen later in the year. Last year Dublin and Cork contested the TESCO NFL Division 1 final with Cork producing a strong comeback to defeat Dublin, something that was to happen again, spectacularly, later in the year. Galway claimed the Division 2 title last year and they went on to win a third Connacht title in a row and progressed to the All Ireland semi final where they were narrowly pipped by Dublin. Armagh were the TESCO NFL Division 3 Champions in 2014 and they continued their form to win the Ulster Championship later that Summer.

Much attention for this new season will focus on the mighty Cork team who were recently named the 2014 RTE Sports Team of the Year. Cork will be attempting to make it three Division 1 titles in a row when they open up their campaign away to Mayo on February 1st. This promises to be the most competitive season in recent years with the addition of Galway to the top division, Dublin will hope to continue their remarkable progress under Gregory McGonigle in 2015 whilst Monaghan, Kerry and Mayo, all under new management will hope to make a renewed push for honours.

Division 2 of the TESCO National Football League could be the highlight of the season with some very evenly matched counties ready to take the field. Armagh, fresh from claiming the Ulster title in 2014, will hope to gain back to back promotions but they face fierce competition from Ulster rivals Donegal, Down and Cavan with Westmeath expected to rally again having reached last year's decider.

Roscommon made the long awaited breakthrough as they claimed the Division 4 crown in 2014 but they will need to continue to produce their best form if they are to make an impact on a very competitive Division 3 which will include their provincial neighbours; Sligo and Leitrim. Offaly had a harsh return to reality in 2014 when they were relegated straight back to Division 4 following promotion the previous season, they will be joined by Antrim, Derry, Wicklow, Limerick and Louth in what will be a division that could be claimed by any of the counties.

Speaking at the launch of the 2015 Tesco National Football Leagues LGFA President, Pat Quill, said 'The partnership between TESCO and the LGFA is one that has been a great success, this is the third year of the sponsorship of the league and it is fair to say that they really have been great partners to the association at every level from intercounty right through to the grassroots. There is a huge amount of interest in Women's Sport in recent times and rightly so, we have some great successes in our own sport to point to including the great Cork team and indeed the performances in last year's club final by Geraldine McLaughlin. We have a real marketable product and we really hope that we can see the boost in interest in the sport reflected in attendances nationwide, this is why we have taken our launch out on the road, to spread the word that Ladies Gaelic Football is something that is near you and is well worth watching!'

Tesco Ireland Marketing Director, Henry Dummer said 'We are delighted to continue our support of the Tesco National Football Leagues, one of the premier national competitions in the Ladies Football calendar. Every county involved will contest in an intensive league campaign hoping to secure silverware and/or promotion, while identifying and building new talent along the way. Sponsoring the Tesco National Football Leagues demonstrates our commitment to assisting the LGFA in developing the game across the country, and our combined goal of promoting female participation in sport. I would like to wish all counties, players and team managers every success in the League this season and look forward to watching the action unfold over the coming months."