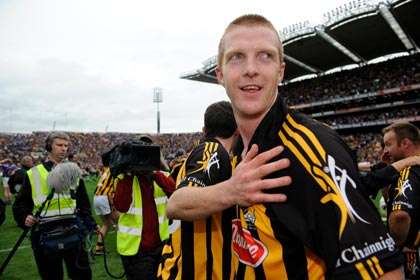 Kilkenny's Henry Shefflin
Kilkenny county board have confirmed that a cruciate knee injury will rule Henry Shefflin out of next month's All-Ireland SHC final while Brian Hogan should be able to play.

The Ballyhale Shamrocks man was forced off during Sunday's All-Ireland semi-final win over Cork and a scan confirmed that it was a cruciate injury.

"Henry Shefflin's injury has been confirmed as a cruciate ligament injury to his left knee," said the statement from the Kilkenny county board. "His previous cruciate injury was to his right knee."

Centre back Hogan also left the field of play during the first half last Sunday and it was feared he had suffered a reoccurrence of the broken collarbone which kept him out for a long spell last season.

"Brian Hogan's shoulder injury is not as serious as first thought and with treatment he should be fit for the All Ireland final.

"Kilkenny County Board and all Kilkenny supporters wish both Henry and Brian all the best as they begin their recoveries." Tweet